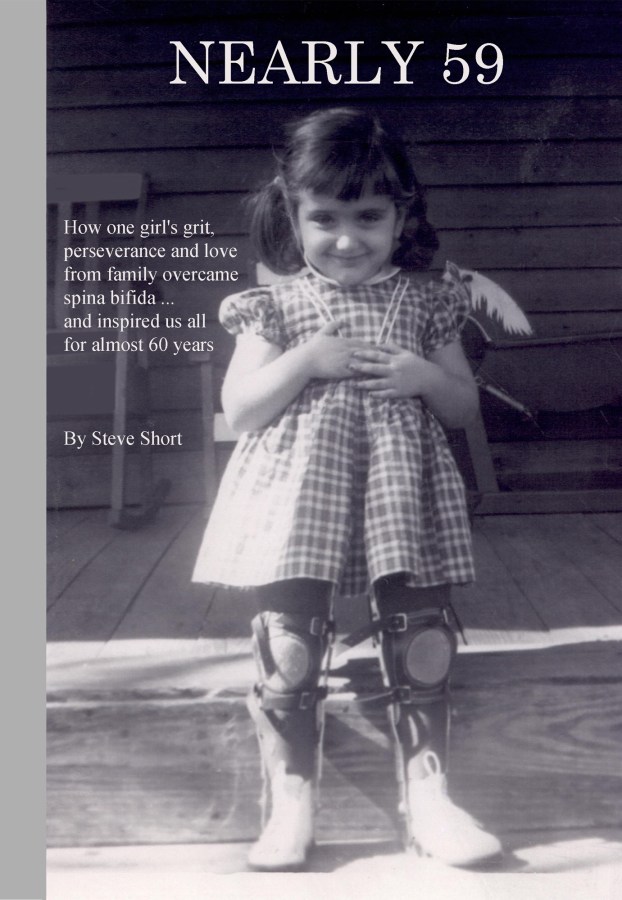 Americus native Steve Short has written a memoir on the life of his sister that pays tribute to her accomplishment of living with spina bifida and inspiring all those her knew her.

“NEARLY 59 / How one girl’s grit, perseverance and love from family overcame spina bifida … and inspired us all for almost 60 years” is an inside look at Americus resident Anne Short, who died in 2015 at age 58. She was a well-known Sumter Countian who during her lifetime credited the love of her parents and extended family and friends in helping her enjoy a fulfilled life for nearly six decades.

The self-published book will be available at stores in Americus and Plains, as well as from Steve Short himself. Copies should arrive Jan. 22. At the current time, it can be ordered online through Amazon.com, by searching the title and Steve Short’s name. Dozens of copies already have been sold through Amazon.

Former newspaper executive Beth Alston of Americus and newspaper executive Ron Sirmans of Atlanta wrote blurbs for the book. Alston says that Short’s “unabashedly sentimental book” reflects the community’s outpouring of love for Anne.  “She was a strong, resilient human being who never allowed her physical limitations to keep her from enjoying life. She is a hero to all who knew her during her all too brief time on earth and will never be forgotten by all whose life she touched.”

Sirmans writes, “Steve Short has a journalist’s eye for details, and his knowledge and love of Georgia and his community come through in this story. This story is a testament to how someone can endure what life throws at them, and their lasting legacy.”

After discussions with both Mercer University Press and The University of Georgia Press, among others, Short decided to self-publish the book on his own. It was a trying effort. “Both Mercer and UGA Press at my alma mater felt that my book on Anne’s life did not fit their agenda. It was not the type of book they are publishing these days,” Short said.

“They didn’t feel that ‘NEARLY 59’ would appeal to a large enough audience. Maybe not, but my book was not about making money. My goal is to share with the general reader and the many relatives and friends of Anne just how special her life was. If you knew Anne, you were inspired by her. That theme is referenced over and over again. To know my sister was to absolutely love her … and her will to fight and beat all odds was a winning formula we all admire.”

Short credits his cousin Robby Perry of Plains for his expertise and skill in getting the book published.

The 313-page book includes dozens of photos of Anne’s life from birth to death. The book’s cover photo is one of Anne standing with the help of braces, years before she was forced to use a wheelchair. All the photos help to tell the story of how her physical limitations were no deterrent to enjoying life.

The communities of her hometown of Americus, as well as Plains, Columbus, Albany, Atlanta, and beyond are referenced countless times. Her membership at Hebron Baptist Church in Sumter County as well as her school days in both Plains and Smithville reveal the impact her life had on others. Hundreds of area residents will see their names appear among the pages.

Short, who has written three other books on his family’s history and currently is working to complete his fourth on his paternal grandfather’s family, also copy edited and was a co-author of the “History of Plains, Georgia in 2003.” He is a graduate of Southland Academy and the Henry W. Grady College of Journalism and Mass Communication at the University of Georgia.

He spent more than 26 years in newspaper work, including 15½ years at The Atlanta Journal-Constitution. Today, he works in tourism for the City of Americus. He currently serves as president of the Plains Historical Preservation Trust.

Release from Phoebe Health Systems dated 1/7/2021 Albany, Ga. – Phoebe will begin to vaccinate southwest Georgians who are 65 and... read more