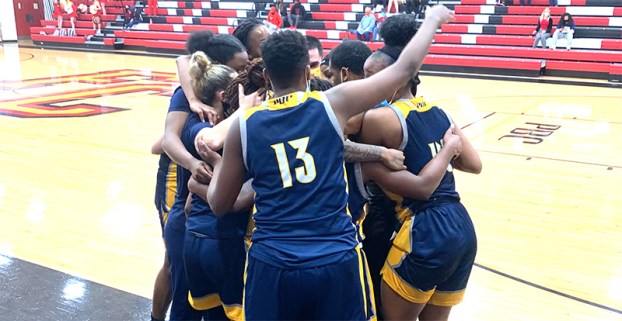 The Georgia Southwestern State University women’s basketball team gathers for a huddle during their PBC contest at Flagler College. The Lady Hurricanes were able to defeat FC 68-65 in overtime. Photo by Christopher Finn

Freshman Jaleah Storr, who had a game-high 29 points, missed a free-throw that would’ve gave GSW the win in regulation. However, the Lady Hurricanes cut a double-digit deficit and scored 10 points in overtime for the comeback win.

For her performance, Storr was recently named the PBC Player of the Week.

A layup by Storr gave GSW (5-3, 3-2 PBC) the initial lead to start the game. FC took the lead with a three-pointer on the following possession and ran with it, taking a 10-5 lead midway through the opening quarter. After going scoreless for three minutes, Chatman scored on a fast-break layup as GSW trailed 12-9.

Storr owned the second quarter, draining four consecutive three’s as GSW chopped down the score, 23-21, with 3:52 remaining in the half. Flagler (2-4, 1-3) steadily continuted to trade buckets as they took a 29-25 lead going into halftime.

Back-to-back three’s by Flagler to open the third quarter saw them take a double-digit lead as they led 35-25 with 8:28 remaining in the third. Unfortunately, the Saints controlled the whole third quarter as the Lady Hurricanes couldn’t scratch the trail as a late three by Chatman pulled them within nine points, 44-35, to end the third.

Flagler opened the final 10 with back-to-back three’s as GSW scored in between possessions from the line. While trading scores, a three by Chatman put GSW behind by two possessions, 58-52, with 2:11 remaining in the game. After a GSW timeout, Storr made back-to-back layups and converted a three-point play as GSW trailed, 58-57, with 51 seconds left in regulation. After a Flagler turnover, Storr was fouled and went to the line as GSW trailed by one. Storr drained 1-of-2 free throws that tied the game at 58 as GSW went into their first overtime game of the season.

In overtime, Daelyn Craig drained two free throws to open as GSW led 60-58. Storr drained her fifth three of the night to push GSW up by five but the Saints converted a three point play as they trailed, 63-61, with 3:00 remaining. After a foul, the Saints were able to tie the game at 63 but A’Aliyah Clay responded in big fashion, scoring her only points of the game with 53 seconds left to take a two point lead. Flagler quickly responded back to tie the game as that led to a GSW timeout. Coming out the timeout with 23 seconds left, Chatman stood and took a three that went straight in for the go-ahead win as GSW took the 68-65 victory.

Storr finished with 29 points as she now sits second in GSW women’s basketball history with most points scored in a game. Chatman (18 pts, 10 rebounds) picked up her fifth double-double this season, as she sits tied in first place with 11 career double-doubles in GSW women’s basketball history. Craig had a team-high 13 rebounds to match with her nine points while Clay picked up six rebounds and six assits.

Hurricanes lose to Flagler in battle for first place