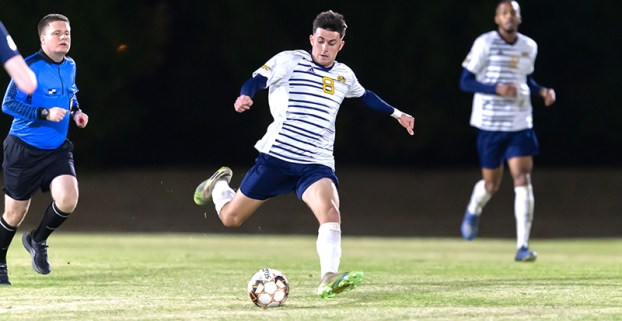 GSW freshman forward Jack Malleret is seen here advancing the ball up the field for the Hurricanes. Photo by Christopher Finn

With the win, LU improves its record to 2-0 this spring, while the Hurricanes (1-1) suffered their first loss of the season.

Max McNulty scored the first goal of the match in the 13th minute on a header in the middle of the 18-yard box off a long floating pass in from Rasmus Andersson that was set up by Marco Gueli. The Bearcats struck again in the 30th minute on an unassisted goal by Tom Marriott.

The Bearcats outshot GSW, 21-6, and controlled the advantage in corner kicks, 4-1. GSW was whistled for four more fouls, 9-5. There were three yellow cards issued in the match.

The Hurricanes return to the pitch on Monday to host North Georgia (0-3) at 7 p.m.

Major League spring training a year ago was moving along at a business-as-usual pace when suddenly, like a bolt out... read more