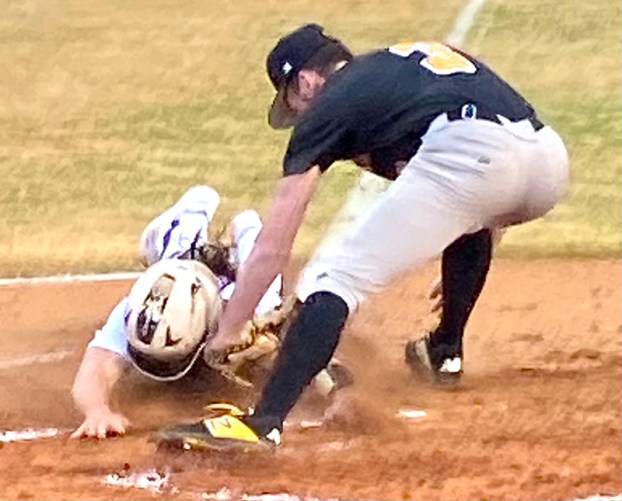 Schley County left fielder Tucker Welch scores on a headfirst slide in the Wildcats’ 13-0 victory over Chattahoochee County in their season opener. Photo by Ken Gustafson

ELLAVILLE – After having the rest of the 2020 season cancelled after just six games due to the COVID-19 Pandemic a year ago, the 2021 Schley County Baseball Team (SCHS) was eager and excited to take the field for its season opener against Chattahoochee County (CCHS) on Wednesday, February 17. The Wildcats showed that excitement as they pounded out seven hits and took advantage of 11 walks by CCHS pitchers en route to a 13-0 thrashing of the Panthers at Schley County High School.

“I told the guys in the pre-game not to take for granted the privilege of being out here,” said SCHS Head Coach Chuck Cheek. “We had three seniors last year who only got six games, so every time we take this field, we need to take advantage of it. I thought they played well. I was really proud of our pitchers. Trypp (Lumpkin) and Ridge (James) threw strikes and they kept the ball down. They dominated the strike zone. That’s really good to see in the first night out when it’s cold as it is and we hadn’t played in a while. I thought we took advantage of some walks. That was part of the story early.” Cheek went on to say that though his team was able to get guys on base by taking advantage of walks, they also took advantage at the plate when they got good pitches to hit. 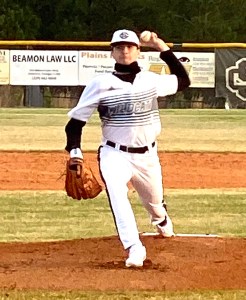 On the mound, SCHS starting pitcher Trypp Lumpkin turned in a dominating performance. In three scoreless innings of work, Lumpkin gave up only two hits and struck out eight CCHS batters. Ridge James then came in to pitch the final two innings without any drop off. James struck out four batters and walked only one.

The Wildcats took control of the game in the bottom of the first inning by scoring six runs on just one hit and taking advantage of five walks, an error and two hit batsmen. In the bottom of the second inning, Jack Clark drove in Welch for the Wildcats’ seventh run of the game on an RBI double. Clark would then advance to third on a passed ball and Athon Hines was able to drive Clark in on a fielder’s choice, making the score 8-0 SCHS. 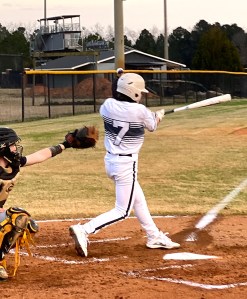 Schley County second baseman Carson Westbrook went 2 for 2 at the plate and scored a run in the Wildcats’ 13-0 win over Chattahoochee County.
Photo by Ken Gustafson

In the bottom of the third inning, Westbrook led things off with a single to left field. The Wildcats would later take advantage of two walks in the inning and scored two more runs on an RBI single by Welch.

After Clark was able to draw another walk to load the bases for SCHS, Owen Lamb scored the Wildcats’ 11th run on a passed ball.

In the bottom of the fourth inning, SCHS added to its lead when Dylan Taylor belted an RBI double to center field. Ridge James scored on the play and the Wildcats had a 12-0 lead. 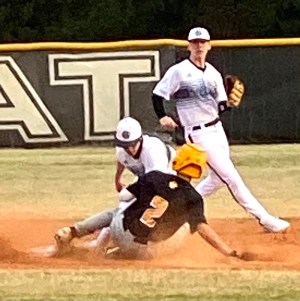 Schley County second baseman Carson Westbrook tags out Alex Prevost of CCHS as he is trying to steal second base.
Photo by Ken Gustafson

However, the Wildcats were still not done. With a runner on second and one out, Lumpkin knocked in Taylor on an RBI double to complete the Wildcats’ offensive explosion.

The Wildcats were scheduled to travel to Roberta, GA on Thursday, February 18, to take on Crawford County, but that game has been postponed due to bad weather. SCHS is scheduled to play Central (Talbotton) in Talbotton, GA on Friday, February 19, at 5 p.m. weather permitting.