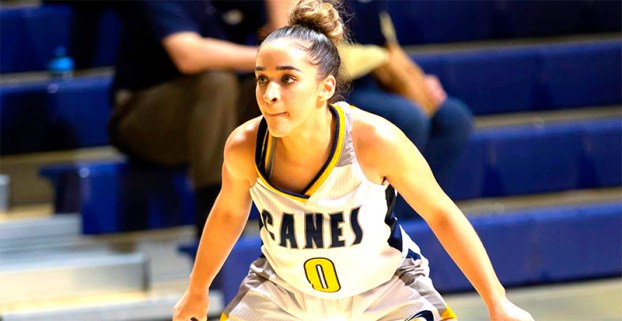 GSW junior guard Yasmin Perez (0) came off the bench to score 16 points in the Lady Hurricanes’ 69-58 loss to the 12th ranked Lady Nighthawks of the University of North Georgia on Saturday, February 20, at the Storm Dome. Photo by Christopher Finn

AMERICUS -The Georgia Southwestern State University women’s basketball team (GSW) came within two points in the third quarter, but failed to regain the lead, losing 69-58 on Homecoming Night inside the Storm Dome to the 12-ranked Lady Nighthawks of the University of North Georgia.

The Lady Hurricanes led with a 44-41 rebound advantage over the Nighthawks.

Two minutes into the opening quarter, Daelyn Craig gave GSW its first and only lead of the night when she drained a three to go up, 3-0.  UNG responded with a three of their on that led to a 15-1 run. The Nighthawks took a 20-10 lead at the end of the first.

The third quarter opened by both teams exchanging scores, but three’s by Lex Chatman and Perez gave the Lady Hurricanes the upper hand. A 7-0 run saw GSW cut the score to 41-43 with 4:22 left in the third quarter but that was the last time they were within one possession. UNG erupted with a 9-1 run right into the fourth quarter, staying up 52-42.

UNG held their double-digit lead throughout the final 10 minutes, picking up a 69-58 win. UNG shot 39 percent from the field while GSW shot 32.1 percent. Both teams attempted 16 three-pointers, but GSW drained five while UNG drained four as they finished shooting 31.3 percent.