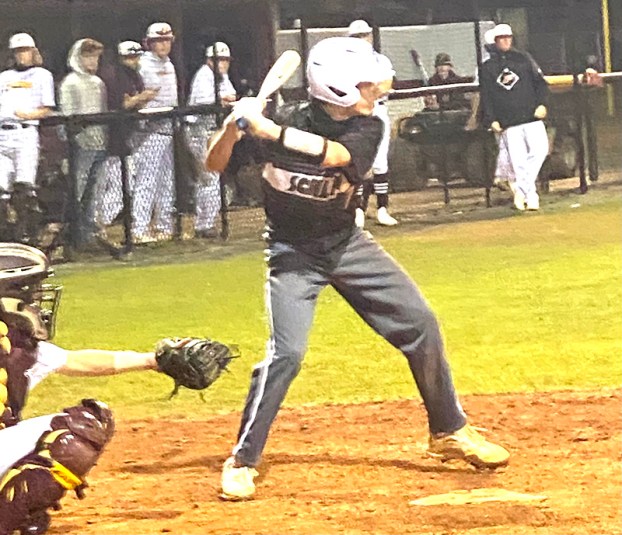 Schley County second baseman Carson Westbrook went 2 for 3 with two singles and an RBI in the Wildcats’ 10-2 loss at Perry. Photo by Ken Gustafson

PERRY, GA – The Schley County Wildcat Baseball Team (SCHS) came into its Wednesday night game against the Perry Panthers (PHS) with an undefeated record of 6-0. The Wildcats were hoping to improve to 7-0 with a win against tougher competition. However, the Panthers were able to capitalize on their opportunities by scoring four runs in the first and four more in the second inning. In contrast, the Wildcats were not able to take advantage when they had runners in scoring position and would go on to suffer a 10-2 defeat to the Panthers on Wednesday, March 3, at Perry High School.

“We struggled in all phases of the game tonight,” said SCHS Head Coach Chuck Cheek. “We didn’t hit well, we didn’t pitch well and we didn’t field the ball well. We have to handle adversity better than we did tonight. Perry is a very good baseball team. They’re the kind of team that I’ve scheduled for us trying to make our schedule as strong as we can because playoff games are going to be against folks that are as good as this or better and we’ve got to be ready for that.”

Schley County shortstop Dylan Taylor scores the Wildcats’ second run of the ball game on an RBI single from Athon Hines in the top of the third.
Photo by Ken Gustafson

In the top of the first inning, it looked as if the Wildcats were going to get off to a dream start against a quality GHSA Class AAAA team on its home field. Luke Renfroe and Dylan Taylor drew back-to-back walks off of PHS starting pitcher Ben McDow. Unfortunately for SCHS, they were not able to take advantage with runners on base as Tucker Welch struck out and Renfroe was thrown out trying to steal third. Then Jack Clark struck out to end the threat and a golden opportunity for the Wildcats went by the boards.

“Their first pitcher (McDow) was good, but he was a little erratic,” said Cheek. “They put some guys on base and we didn’t take advantage of it. If we make some plays and we get a couple of hits in the first couple of innings when we had the bases loaded and first and second, this could have been a much different ball game.”

The Panthers responded in the bottom of the first as Tanner Knowles and Tristen Freis both singled. This was the beginning of a four-run inning for PHS in which the Panthers took advantage of four hits, a walk, two passed balls and a catcher’s interference call. 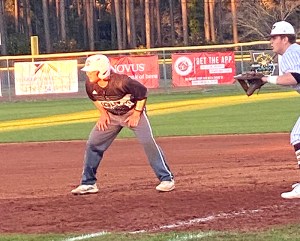 Schley County center fielder Luke Renfroe gets his lead off first after drawing a leadoff walk in the first inning.
Photo by Ken Gustafson

SCHS was able to respond in the top of the second when Carson Westbrook drove in a run on an RBI single. However, With runners on first and second and one out, Renfroe grounded into a fielder’s choice double play, ending the Wildcats’ threat.

The Panthers took advantage in their half of the inning by scoring four more runs. Knowles was able to draw a leadoff walk off SCHS starting pitcher Athon Hines. Freis would then reach on a dropped third strike, but advanced all the way to third base as a result of the passed ball. Lane Rucker was then hit by a pitch and that loaded the bases for Tyler Newhouse. Newhouse took advantage by driving in two runs on a single to center field, giving the Panthers a 6-1 lead. PHS added two more runs in the inning on RBI singles from Carson Bryant and Garrett Davis.

After just two innings of play, the Wildcats found themselves in a deep whole, trailing 8-1.

SCHS added its second run of the game on an RBI single by Hines in the top of the third, but that would be it for the Wildcats as far as run production.

The Panthers added insurance runs in the third and fifth innings to secure the 10-2 victory.

Newhouse did most of the damage for PHS. He went 3 for 4 with three singles, two runs scored and three RBIs.

With the loss, the Wildcats drop to 6-1 on the season, while the Panthers improve to 5-2.

“We just let it get away from us early, and by the time that we settled down, we were already down six runs,” said Cheek. “It seemed like we couldn’t get the big hit with guys on base tonight.”

The two teams will go at it once again on Thursday, March 4, in Ellaville. First pitch is scheduled for 6 p.m.