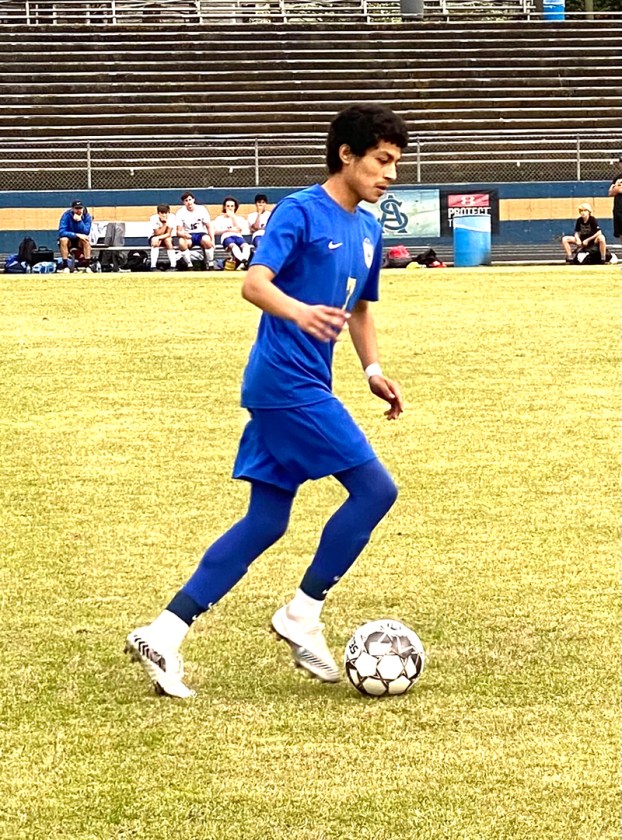 Americus-Sumter junior forward Jesus Rodriguez scored the fifth and final goal of the game to help the Panthers preserve a 5-2 Region 2-AAA victory over Crisp County. Photo by Ken Gustafson

AMERICUS – After giving up an early goal from Crisp County’s Yash Barot less than a minute into the match, the Americus-Sumter Varsity Boys’ Soccer Team (ASHS) was able to settle down and find its footing, as senior forward Alexis Vazquez was able to net two goals in the first half. Then in the second half, the Panthers imposed their will on the match by scoring three goals to earn a 5-2 victory over the Cougars in soccer’s version of the “Battle of the Flint.”

“I think that first initial goal just took us by surprise. We weren’t expecting them to score that fast,” said ASHS Head Coach Michael Pepito. “I think it made a point to us saying that even though we are able to beat them, we can’t take them for granted. Then it seemed like they (ASHS) started to change a little bit. They started becoming a little bit more aggressive. They became better on the ball. We got our goal back and then we got another one. Then in the second half, we just wanted to make a statement. It seems like we are more of a second half team, so our aggression is a lot better, which is kind of weird since we don’t really have subs. 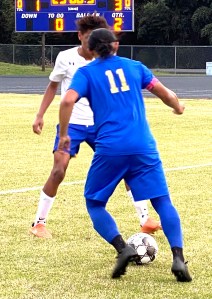 We moved the ball around. They did that a little bit better. We had other people start to score. They (ASHS) just wanted to win. We needed to have the win. If we win out the season, we have the potential of finishing second in the region. We don’t want to lose any more games.”

Trailing 1-0 in the first half, the Panthers went to work, as Vasquez was able to score two goals that were both assisted by Kevin Abarca. By halftime, ASHS had recovered from the early goal by the Cougars and led 2-1.

In the second half, however, the Panthers indeed made a statement and it didn’t take long for that to happen. One minute into the second half of play, Leonardo Diaz scored the first of his two second half goals when he took a shot from around the 18-yard box that went into the upper part of the net, giving the Panthers a 3-1 lead. Then in the 63rd minute, the Cougars had a chance to climb back to within one goal when they were awarded a penalty kick due to a foul by the Panthers that occurred inside the 18-yard box. However, the PK attempt by Gabe Martinez sailed wide of the net and the score remained 3-1 ASHS. 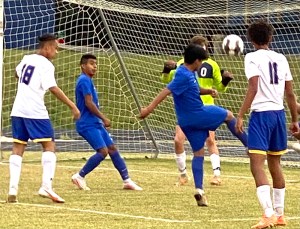 Americus-Sumter freshman forward Leonardo Diaz is trying to flick the ball past the CC goalkeeper. Diaz scored two goals in the second half to lead the Panthers to a 5-2 victory over the Cougars.
Photo by Ken Gustafson

Then in the 65th minute, the Panthers took advantage when Diaz scored his second goal of the match to give ASHS a 4-1 lead. However, about six minutes later, the Cougars were awarded another penalty kick when ASHS defender Luis Diaz Perez was ruled to have fouled CCHS forward Diego Alvarez inside the box. This time, the PK attempt was successful as Kevin Richmond was able to convert it, bringing the Cougars to within two goals at 4-2. 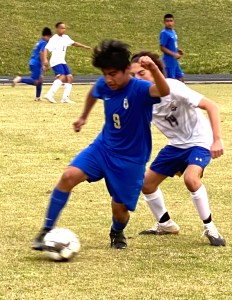 However, this day would belong to the Panthers and they would get the final, decisive response. In the 73rd minute of the match, ASHS forward Jesus Rodriguez picked up a loose ball at midfield, dribbled through three CC defenders and slotted the ball past the Cougars’ goalkeeper and into the far corner of the net to complete the Panthers’ 5-2 victory.

Throughout the second half, the Panthers controlled most of the run of play and were able to create more chances to score. ASHS goalkeeper Ary Flores was able to come up with a couple of saves to prevent any further goals from the Cougars. 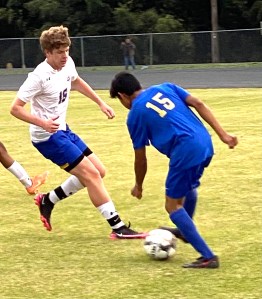 Americus-Sumter freshman Miguel Cuevas (15) tries to get past a CC defender.
Photo by Ken Gustafson

With the win, the Panthers improve to 4-3 on the season and are now 3-2 in Region 2-AAA competition.

The Panthers will now turn their attention to Chattahoochee County, whom they will face on Thursday, March 26, at 7 p.m. in Cusseta, GA. Their next Region 2-AAA game will be at home on Friday, April 2, against Central (Macon). Kickoff for that game is scheduled for 7:30 p.m.

From Staff Reports   AMERICUS – It was a bittersweet week for the Americus-Sumter Varsity Boys’ and Girls’ tennis teams.... read more