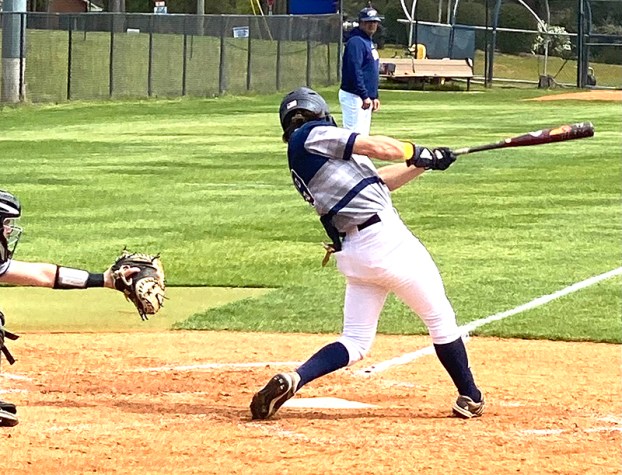 GSW sophomore Reid Ragsdale went 2 for 4 with a double, a single and a run scored in the Hurricanes’ 3-2 loss at Valdosta State. Photo by Ken Gustafson

Down 3-1 in the top of the ninth with one out, the Hurricanes made a bid for a comeback when Jonathan Martin drove in Jeffrey Omohundro on an RBI single to get to within one run of tying the game. However, Miles Hartsfield flew out to left field and Gregory Wozniak struck out to end the game.

The game was scoreless until the bottom of the fourth inning, when the Blazers scored two runs on a walk and a sacrifice fly. With the bases loaded, VSU’s E.J. Doskow drew a walk off GSW relief pitcher Riley Powers, who ended up taking the loss. Nick Lewis scored from third on the walk to give VSU a 1-0 lead. Then Chase Coker drove in the Blazers’ second run when he hit a sacrifice fly to left field, scoring David Mayberry from third.

The Hurricanes were able to close the gap in the top of the fifth. With one out, Reid Ragsdale doubled to left field and Martin drove in Ragsdale on an RBI double to right, making the score 2-1 VSU.

However, the Blazers responded in the bottom of the sixth when Mayberry belted a solo home run over the center field wall to extend the VSU lead to 3-1.

The next two innings were scoreless between the two teams, but in the top of the ninth, the Hurricanes made one final push to tie or win the game. Omohundro led off the inning with a single to center field. This was followed by a single from Brandt Sundean. Just like that, the Hurricanes had a golden opportunity to tie or take the lead with runners at first and second and nobody out.

Reid Ragsdale then laid down a sacrifice bunt to advance the runners to second and third with one out. Jonathan Martin then followed with the RBI single to left field. The Hurricanes had the tying run at third and the go-ahead run at second with one out. However, Miles Hartsfield’s fly ball to left field wasn’t deep enough to score Omohundro from third and Gregory Wozniak struck out to end the game.

McCollum, who started on the hill for the Hurricanes, gave up no runs on one hit, walked one and struck out three in three innings of work. Riley Flowers came on in relief of McCollum and gave up two runs on two hits, while walking two. As a result, he ended up taking the loss and is now 2-1 on the season.

Mayberry was the hot bat for the Blazers. He went 2 for 3 with a home run, two runs scored and one RBI. Kevin Tomas (1-0) was the winning pitcher for VSU. He gave up one run on four hits, walked one and struck out none in 3.2 innings of work.

With the loss, the Hurricanes drop to 8-10 on the year and are in the midst of a four-game losing streak. They will try to end that losing streak when they begin Peach Belt Conference play in Augusta on Saturday, March 27 against Augusta State. The Hurricanes will play a doubleheader on Saturday against ASU, with Game 1 starting at 12 p.m. The final game of the series will be on Sunday, March 28 at 1 p.m.

The next home game for GSW will be on Tuesday, March 30 against Albany State. First pitch for that game is scheduled for 6 p.m.