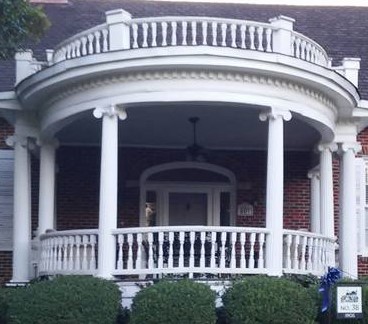 I have a crown on my house. As much as I love architectural detail, I am completely stupid at calling those details by name. I don’t know the name of this feature, but when I tell you it is a crown, it is exactly what you think a crown would be. Much like the railing along the bottom of my round porch, the top of my porch roof is a railing made up of spindles. The spindles stand on a piece of heavy and thick wood, and they are covered on top in a matching piece of wood. Ever so often, as it curves around my porch roof, tiny little columns adorn it. It is, well, a crown sitting regally upon the head of my home. However, because time has a way of finding everything, some rot had set in and she was losing her integrity. The crown had to come down, be reinforced, pieces replaced, painted and then restored to the head of my home. It took what seemed like forever, and to hear the men who were in charge tell it, it was a complicated and complex feat of engineering to accomplish. But alas, my lady of Lee Street is royalty and a shining crown she must have. So down came her crown, piece by manageable piece, until she was all packed away on my daddy’s trailer heading to the shop where she would undergo an extensive restoration. As the weeks passed and the pieces of the crown were renovated, they were stored under the porch of another house. That is where I found them, all restored and glorified.

At first glance my brain would not absorb it. I was used to the crown being in one piece, being out of reach, and demanding I look up to see it. Under this porch, at feet level, in four or five different pieces the crown now sat. Although not the crown I had come to know, this view was just as amazing as it was on top of my home. The crown, taken down and laid out at my feet, I could immediately name, because I had seen it all my life. With one piece of heavy wood, meeting spindles and sitting upon another piece of wood and columns anchoring the ends, I was looking at an altar. I found it delightful, these little altars dotting the porch. I took a picture and sent it to the man who had taken the crown down piece by piece and would put it back into place. My note with the picture said, “Little altars everywhere!” It was my way to tell him the work had been completed and he was up next. 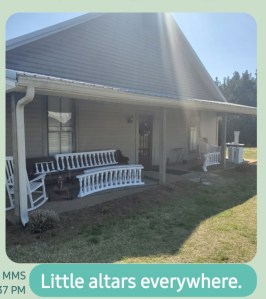 Because I like to be able to leave a piece of me in everything in my home, I always ask to do one little task in each restoration job. It is my way of saying, “I have some ownership here.” It is my way of writing a line in the story of this home. It is my way of knowing I mattered in making something beautiful. I’ve hired many a man to take on many a restoration project. I always get the same expression when I ask them to put aside one small task I can complete.  Some think it odd, some completely understand, but ultimately, they have always honored my request. Putting the crown back on the roof was no different. I wanted to matter in the crown’s story and asked one task be reserved for me. It was. After the crown was restored, I was given the very last detail to complete. I loved this because it felt like I was putting the last bobby pin in to secure the crown. That’s a pretty big line to write in the story, and I was overjoyed to be writer. So, on a Friday morning, very inappropriately dressed in a maxi-dress and bare feet, I climbed a ladder and landed on the roof.  On this day I slipped in the last bobby pin. The crown was secured, completely restored and standing in her glory. And on my trip down the ladder, I looked up once more and heard my soul say, “slow down.” So, I quieted my mind and from somewhere deep inside myself I realized I had been invited into a story. It was a good thing I was already barefooted because I was standing on holy ground.

This story I was invited into, I have heard before. In a new way I was told again how my king put aside his exquisite crown to take on my excruciating and repulsive one. In a very precious way, as only he could do, he exchanged his crown for my altar. An altar I would cling to in my most painful desperation, the kind of desperation I can feel in my throat, chest and stomach. An altar to stand beside me while I celebrate with overwhelming gratitude. An alter where I experience who He is, so I can know who I am. An altar which serves as a table, so I can feast with Him when I am in the pit of hunger.  An altar to hold me up when I have nothing left to offer but deep tears, silent sobs and exhaustion.  At this altar, made from a crown he lovingly put aside, I offer ashes and pick up beauty. I exchange weary and dry bones for a spirit of joy. I lay down my burdens to walk away with his victory. I exchange my failures and regrets and for his peace and hope. I trade my crippling inability for his infinite power. I hand him my fears and he confers upon me an unfathomable courage. I hand over my shame and he bestows me glory.  I give him my disease and he allots me something fresh. I offer up praise and he dances with me. When he created an altar out of his crown, I was allowed to write a line in his eternal story. He made sure I had a part of making something beautiful. He evermore told me I matter. He took the crown, being out of reach and so high above me, and created for me an altar to make my home in. What I never could touch, he laid at my feet. His crown was put aside because an altar was desperately needed. An altar where the Holy can love the filthy. I would need this altar over and over again to see his face. He would need this altar over and over again so he could hold my face in his hands. Oh, how he loves my face!

So yes, there was a moment when my soul said, “Slow down, there is an invitation to soak in a story here.”  My heart is glad to accept this invitation.  How overwhelmed I am to hear the king tell his story again and again. My soul swells to write my line in his story which makes all things beautiful. I mattered in making something beautiful. I needed to take notice of this story where time has no power. I needed a new experience of learning his crown is forever restored, secured, glorified and regal. Once again, I am invited into Easter’s story. Once again, you are invited into Easter’s story. Can you hear it? Do you see the line you wrote in this story? Your name is part of his story. And it matters. You mattered in making something beautiful. His crown for our altar. Slow down, hear the invitation and linger at the altar he created for you. Let him hold your face in his hands. Oh, how he loves your face!

A word from Chief Mark Scott

Last month we published an article addressing the recent increase in gang related gun violence here in Americus and across... read more