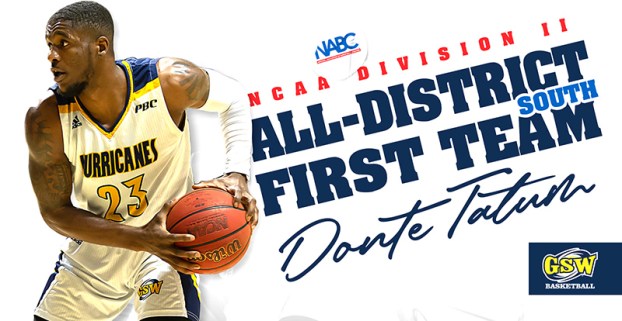 An All-Peach Belt Conference first team selection, Tatum started all 17 games and led the Hurricanes with 18.4 points per game. He was second on the team with 6.1 rebounds per game while averaging 2.0 assists and 1.3 steals per game. Tatum finished the season with nine 20-plus scoring games and a team-high four double-doubles. He turned in his best scoring night of the season with 27 points in the NCAA tournament against Lee University. He finished the season fifth in the PBC with 18.2 points per game and sixth with a 55.7 field goal average.

Tatum, a native of Raleigh, N.C., becomes the second Georgia Southwestern player to earn a postseason award from the NABC during the program’s NCAA era. Phillip Brown was named an NABC All-American following the 2010-11 season.

Member coaches of the NABC in NCAA Division II selected and voted on the 89 student-athletes named to the 2020 All-District teams.

Located in Kansas City, MO, the NABC was founded in 1927 by Forrest “Phog” Allen, the legendary basketball coach at the University of Kansas. Allen, a student of James Naismith, the inventor of basketball, organized coaches into this collective group to serve as Guardians of the Game. The NABC currently has nearly 5,000 members consisting primarily of university and college men’s basketball coaches. All members of the NABC are expected to uphold the core values of being a Guardian of the Game by bringing attention to the positive aspects of the sport of basketball and the role coaches play in the academic and athletic lives of today’s student-athletes. The four core values of being a Guardian of the Game are advocacy, leadership, service, education and inclusion. Additional information about the NABC, its programs and membership, can be found at www.nabc.com.