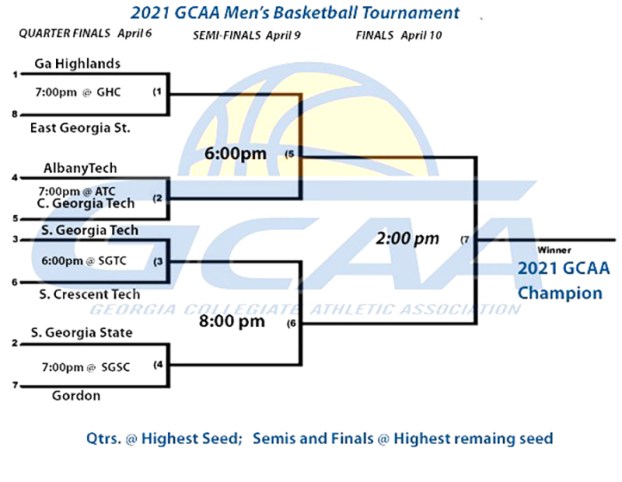 This is the NJCAA Region 17 Division I men’s basketball tournament bracket.

AMERICUS – The South Georgia Technical College (SGTC) Jets earned the opportunity to host a first round or quarterfinal game in the NJCAA Region 17 end of the season tournament.  The Jets finished the season in third place and will host sixth ranked Southern Crescent Technical College at 6 p.m. on Tuesday, April 6th in the hangar on the SGTC Americus campus.

The Jets, under interim head coach Chris Ballauer and assistant coach Jaren Harris, finished the regular season with an 11 – 5 GCAA conference record.  They are 13 – 9 overall.  This is the first time since the 2018 – 2019 season that the Jets have earned the right to host a game in the Region 17 tournament.

South Georgia Technical College split decisions against Southern Crescent in the regular season.  The Jets took an 85 – 81 victory over Southern Crescent in double-overtime on Saturday, February 27, but then lost a 70 – 67 overtime decision to the Tigers in Griffin on March 2.

The winners of each of those matchups will advance to the semi-finals on April 9.  The semi-finals and finals will be hosted at the highest remaining seed on April 9th and April 10th.  Semi-final games will begin at 6 p.m. and 8 p.m. on Friday followed by the championship game at 2 p.m. on Saturday.