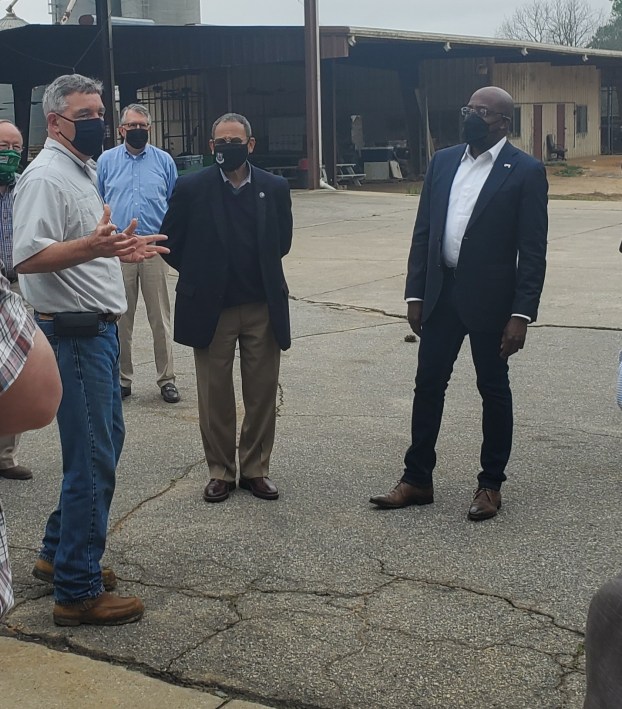 Farmers speak with our elected officials

Congressman Sanford Bishop and Senator Raphael Warnock made a stop at Minor Brothers Farm in Leslie on Wednesday, March 31, 2021. The stop was one of several the representatives planned to take questions and offer an update on the activities in Washington, D.C. Dick Minor welcomed the gentlemen to Sumter County and his family farm. Dick and his 2 brothers carry on a generational farm, specialty crops are their focus. In addition to Dick, several regional farmers were present to meet the men. They came with ideas and real-life experience of the impact of legislation on their day to day lives.

Charles Hall, who is the Executive Director of Georgia Fruit and Vegetable Growers Association (GFVGA), presented some of the impacts. The GFVGA is active in procuring legislative support for farmers. Some of the top issues include labor and immigration reform as well as trade. Charles highlighted the impact trade and imports have on our local farmers. He pointed out as Mexico productions are increasing it is causing our local production to suffer. “Mexico imports all of our fruits and vegetables and it is going up, while our production is going down.” He went on to report what costs our farmers $16-18, Mexico will sell for $10. One of the reasons is our farmers are paying a fair wage to their workers, while Mexico is paying unreasonably low wages to their workers. The GFVGA website reports that while Georgia farmers may pay $10 an hour and more to their employees, Mexico will pay $10 a day. This is but one factor that plays into Mexico produce causing our local farmers to be sacrificed. Charles went on to say, “We need to get bureaucrats in Washington to understand it from this standpoint.” Another point Charles wanted to make understood was the financial impact farmers have on Georgia’s economy. According to the Georgia Farm Bureau, Georgia farmers are contributing over 73 billion dollars to the state. Among the top producers are blueberries. Charles wanted the congressmen to understand while we are known as the “Peach State” our blueberry production tops peaches. Currently before congress are issues which impact our blueberry farmers. While presenting the case on behalf of Georgia farmers, the opposition was overwhelming. In the last hearing on the subject, Charles reports it as a “David and Goliath case and it is Goliath who won this one.” The voices for the team who would represent the fight for Georgia blueberry farmers were limited and the opposition had financial backing which equated to a 26 to 1 ratio in being able to have their voices heard. Charles reports blueberry farmers do not have the kind of financial resources to hire people to defend their case in such a manner and they are needing our representatives to stand up for their concerns.

Regarding labor, a farmer from Tifton addressed the issue. While there is current legislation in place, it is not as effective as our local farmers would like it to be. The hourly wage for a farm worker is a little over $11 but considering the farmer must provide housing and transportation it equates to over $15 an hour. He states immigrant workers are not sustainable as they invest the time needed to allow them to stay in the country and then leave the farm. He also reports American workers are not interested in working in the fields. In 2012, this farmer hired 1630 employees, none lasted longer than 2 days. In 2013 he hired 1680 workers and of those he only has one remaining in his employ. Trade and immigration issues are of high priority to our farmers and legislation around such is vital to them being able to produce for the American family. The farmers wanted our representatives to understand how their efforts and votes would affect our agricultural capabilities and the impact the legislative work they did was felt daily. They also wanted to them to understand the economic impact COVID-19 had on their operations. Farmers have been adding precautions such as “spraying” to keep the spread of the virus to a minimum as they can not afford to have their workers exposed. These efforts, along with paying for testing of their workers is both costly and effective. The farmer reported that during this year of COVID-19, he had one worker test positive for the virus in March of 2020 and his last worker tested positive in May 2020. He remarks on how the farmer was proactive in containing the spread and credits the limited positive cases to being proactive and sustaining those efforts. Farmers are indeed essential workers in every sense of the word and to keep the industry vital they have invested much into keeping the working environment as safe as possible.

In addition to these issues, the farmers were pleased with a bipartisan bill that Congressman Bishop has cosponsored. Dick Minor thanked Bishop for his efforts in addressing inheritance taxes. Bishop explained to Warnock he was the only democrat to co-sponsor the bill which would keep inheritance taxes at a reasonable rate. This is particularly important to farmers as the inheritance they leave their families is their farm. For farming families to be taxed at a high rate would be detrimental to keeping the business running.

Our farmers touch our lives in many ways. It is imperative our policy makers understand how their legislation effects not only the farmers, but all of us who partake in their bounty. While there is action on their behalf being undertaken, it is important the people passing our laws understand how those laws are being played out at home. Some of the legislation is harmful, some has been helpful. This was an opportunity to present the view from the farm to our representatives in Washington. Our farmers, ever faithful, showed up to speak their truth to the people who have the power to help and/or harm them. They are ever hopeful their words will stay with our representatives so their work can continue to be a powerful part of our lives.

For more information on the legislation farmers are pushing for, please visit the GFVGA website at gfvga.org. To add to our farmers’ voices, please consider contacting Congressman Bishop or Senator Warnock.