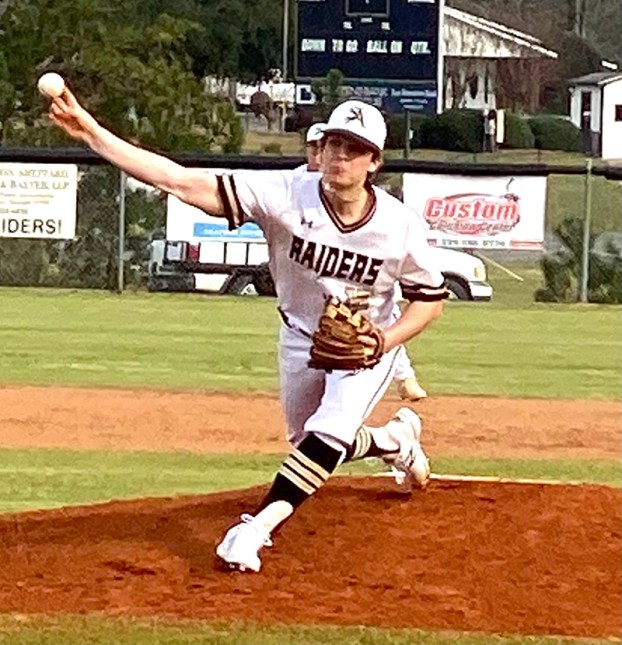 Southland Academy starting pitcher Chase Ledger struck out eight batters and went 3 for 4 at the plate with a double, two singles and an RBI to lead the Raiders to a 15-5 victory over Southwest Georgia Academy. ATR Archive

DAMASCUS, GA – Southland Academy (SAR) pitcher Chase Ledger struck out eight batters and went 3 for 4 at the plate with three singles, a double and an RBI to lead the Raiders to a 15-5 rout of Southwest Georgia Academy (SGA) on Thursday, April 1, in Damascus, GA.

In six innings of work, Ledger gave up no runs on six hits, while striking out eight SGA batters and walking three.

In addition to Ledger’s production at the plate, both Owen Exley and James Griffin each had multiple hits in this game. Exley went 2 for 4 with a double, a single and two runs scored, while Griffin went 2 for 3 at the plate with a triple, two singles, two RBIs and one run scored.

The Raiders scored a run in the first and third innings to take a 2-0 lead. They followed that up with three runs in the fifth and two more in the sixth to increase their lead to 7-0.

However, SAR was still not done. In the top of the seventh, the Raiders exploded for eight runs on two hits and they took advantage of five hit batsmen, three walks and an error. Buddy Brady had the big hit of the inning, as he belted a two-run double to left field.

However, trailing 15-0 in the bottom of the seventh, the Warriors finally fought back. With one out and SAR reliever Perry Usher on the mound, Jaxson Haire and Kole Kimbrel hit back-to-back doubles, putting runners at second and third. After Usher was able to strike out Ty Williams to bring the Raiders to within one out of victory, Beau Collins drove in the Warriors’ first two runs of the game with a single. Brady Brunson was hit by a pitch and the Warriors had runners at first and second with two outs. Jack Davis then singled to load the bases for Cade Nixon, who promptly drove in three runs on a double to right field.

Fortunately for the Raiders, they had already done enough damage to lead by a wide margin. They were finally able to secure their victory when Tyler Sherling grounded out to Exley at shortstop to end the game.

With the win, the Raiders end a five-game losing streak and improve to 4-5 on the season, while the Warriors drop to 8-4.

SAR will travel to Milledgeville, GA on Saturday, April 3 to take on John Milledge Academy. First pitch is scheduled for 12 p.m.