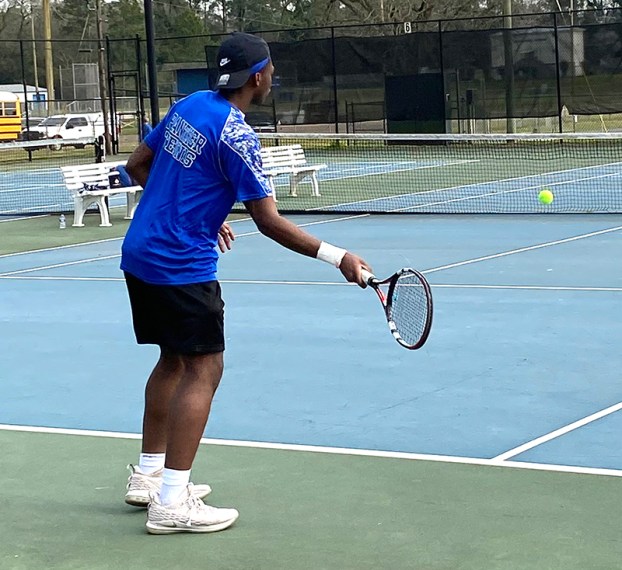 HAWKINSVILLE, GA – The Americus-Sumter High School boys’ and girls’ tennis teams had mixed results against Hawkinsville High (HHS) on Friday, April 2 in Hawkinsville, GA. The Panthers were able to shut out the Red Devils 5-0, but the Lady Panthers, though they fought extremely hard, fell to HHS by the score of 3-2.

In girls’ action, the Lady Panthers got things started off on the right footing as Teigan Pepito, the Lady Panthers’ #1 player, defeated Riley Sinyard in straight sets 6-2, 6-3. Rebecca Ingle was hoping to repeat Pepito’s success, but she lost a tough first set to Sam Lancaster 5-7 and dropped the second set to Lancaster 0-6.

With the girls’ team match tied at 1-1, it was up to the ASHS #3 player, Alecia Holmes, to come through with a win. Holmes was able to do just that by beating Cassidy Head in the first set 8-2. Head was not able to continue the match. Therefore, Holmes was declared the winner, giving the Lady Panthers a 2-1 lead.

At this point, all the Lady Panthers needed was one doubles victory to clinch the team match. The ASHS #1 doubles team of Trinity Gilliam/Melanie Wooden won the first set 6-2 against the Lady Red Devils’ duo of Lindsey Davis/Mallory Wood. All Gilliam and Wooden needed to do was win the second set to guarantee the Lady Panthers a team victory. However, Davis and Wood won the second set 7-5 and then won the third set 10-2 to tie the team match at 2-2.

It was now up to the ASHS doubles team of Paris Eberhardt and Donesia Westbrook-Myrie to come through with a victory. However, they fell to the HHS doubles team of Cat Lancaster and Kyris Mingo in straight sets 5-7 and 3-6.

In boys’ action, things went much better for ASHS, as the Panthers were able to sweep all the singles and doubles matches for a 5-0 victory. In the first singles match, the Panthers’ #1 player, Zach Johnson, defeated Gabe Sangster in straight sets 6-0, 6-0. In the second singles match, Keldrick Flemming was pushed to the limit by his HHS opponent, Nathan Belcher. Flemming won the first set 7-5, but lost the second set 5-7. However, Flemming fought his way to victory by beating Belcher in a tiebreaking third set 10-8. This put the Panthers within one more singles match of winning the team match against the Red Devils.

In the third singles match between the Panthers’ Jeremy Bembrey and the Red Devils’ Gage Williamson, Bembrey was able to take total control. He won the first set 6-2 and won the second set 6-1 to win his match and secure the team win for ASHS.

In doubles action, the ASHS duo of James Ndaayezwi and James Schopen Davis defeated the HHS team of Zach Ryan and Tucker Johnson in straight sets 6-4, 6-2.

Having won the team match, all the Panthers needed to do now to shut out the Red Devils was to win their second doubles match. The ASHS team of Corey Wright and Cameron Evans won the first set over the HHS team of Seth England/Owen Coleman, but fell 4-6 in the second set. However, Wright and Evans won the third and deciding set 10-4 to clinch the 5-0 shutout for the Panthers.

Up next for the Panthers and Lady Panthers is a road match at Marion County on Monday, April 5, followed by their regular season finale at home against Shaw on Wednesday, April 7.