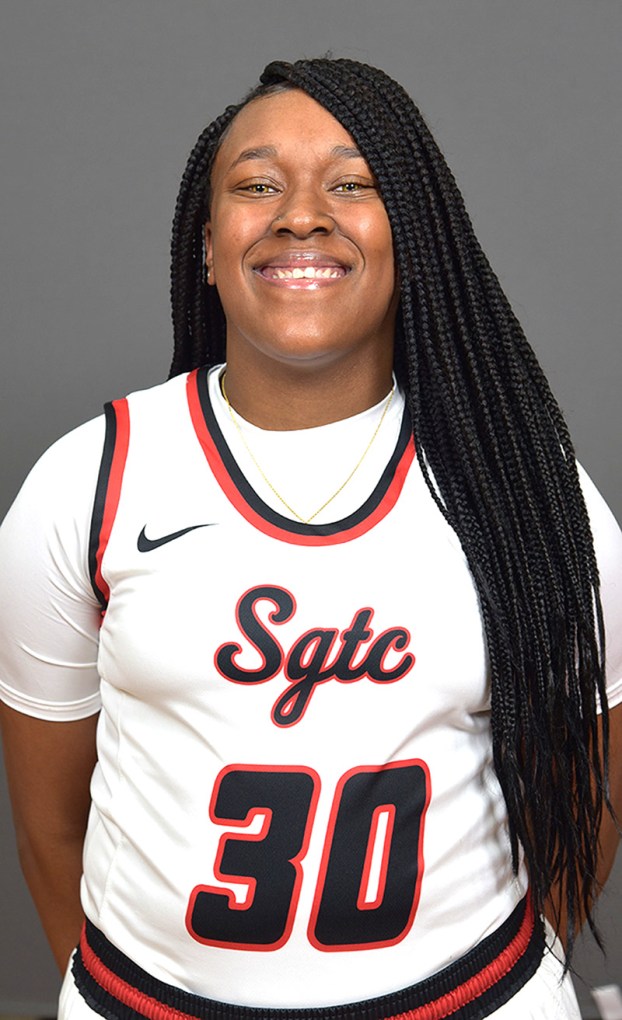 SGTC Lady Jets’ sophomore shooting guard Kamya Hollingshed had two torn ACLs during her career at SGTC, but has worked her way back on to the court for the Lady Jets. Photo by Su Ann Bird

AMERICUS – The struggle was real after undergoing surgery for two torn ACL’s in two years and at times Kamya Hollingshed doubted if it she would ever be able to return to the basketball court as a player for the South Georgia Technical College (SGTC) Lady Jets.  “She is an amazing person and player,” said SGTC Lady Jets head coach James Frey.  “And her hard work on and off the court is finally paying off.”

The 5’7” shooting guard from McDonough, GA arrived at SGTC as a freshman for the 2018 – 2019 season.  In her first season, she immediately made a difference on the court, playing in 34 games and starting three.  She averaged 8.5 points per game and hit 37 percent of her shots from the field and from the three-point line.  She was also a 78 percent free throw shooter and was on the court for an average of 17 minutes per game.

During Hollingshed’s freshman season, the Lady Jets finished the regular Georgia Collegiate Athletic Association (GCAA) conference season undefeated at 18 – 0. It was the first unbeaten conference season for Coach Frey and only the second in the history of the women’s program.  The Lady Jets captured the GCAA regular season conference championship and won both the NJCAA Region XVII Region Tournament and the District J Tournament to advance to the NJCAA National Tournament for the sixth time in the history of the program and fifth time under Coach Frey.  This was the Lady Jets’ third consecutive trip to the national tournament and fifth in six years. The Lady Jets finished the season with a 30 – 4 overall record, which was the best for the program at that time.

Coach Frey and the Lady Jets were expecting big things from Hollingshed as a sophomore, but it was not to be.  She tore her first ACL prior to the start of the season.  SGTC kept her on scholarship and red shirted her for the season utilizing her as a player/coach.  She rebounded and rehabbed her knee from the surgery and remained at SGTC for an additional year.  This season, she injured the other knee in preseason and underwent her second ACL surgery. She hoped to be able to return as a player but the outcome was uncertain.

“Kam worked very hard and did everything we asked of her,” said Coach Frey.  “Due to COVID-19, all of the players received an extra year of eligibility for this season, so when Kam and the doctors and trainer felt like she was able to return to the court, we gave it a shot.”

Coach Frey had originally planned to let her start or at least step on to the court in uniform to be recognized during the SGTC sophomore day game on March 20.  However, she progressed so well that he gave her the opportunity to play at home against East Georgia State College on March 16.  She did, but was cautious and nervous.  “I was excited but also nervous when I got to step out on the court for the first time in two years in an actual game,” said Hollingshed.

“Kam has redefined the meaning of a positive outlook.  Kam torn both ACL’s the past two pre-seasons but her incredible work ethic and desire in rehab have gotten her back on the court just four and a half months after her most recent surgery,” explained Coach Frey.  “Kam has maintained an incredible attitude through her injuries and became known as ‘Coach Kam.’”

Because of her hard work and determination, she is now known as Kam, the player.  “After leading the Lady Jets to a fourth quarter, come-from-behind victory in Swainsboro, Hollingshed is now leading the team in three-point percentage shooting,” said Frey.

Hollingshed has a 3.6 GPA and will graduate in May with an Associate’s Degree in Sports and Fitness Management.  She will still have three years of eligibility left as a player, but is uncertain right now which direction she will take.

Fortunately for the Lady Jets, Kam will be available to suit up as Kam the player, when the Lady Jets advance to the NJCAA Region 17 tournament on Friday, April 2 at 8 p.m. in Rome at Georgia Highlands College.  The Lady Jets will face the winner of the quarterfinal game between third-seeded East Georgia State and sixth-ranked Andrew College in the semifinal contest.  The winner of that semifinal game with SGTC will advance to the finals on Saturday, April 3 in Rome.  Georgia Highlands is currently the top-seeded team in the conference and will play the winner of the game between fourth-ranked Albany Tech and fifth-seeded Central Georgia Tech at 6 p.m. on Friday, April 2 for the right to advance to the finals.

JockJive Sports did an interview with Kam Hollingshed after her impressive return to the court.  To see the video interview, visit the SGTC YouTube page at: https://youtu.be/VplPSLXig54

From Staff Reports   AMERICUS – Having won both their matches at Marion County on Monday, April 5, the Americus-Sumter... read more