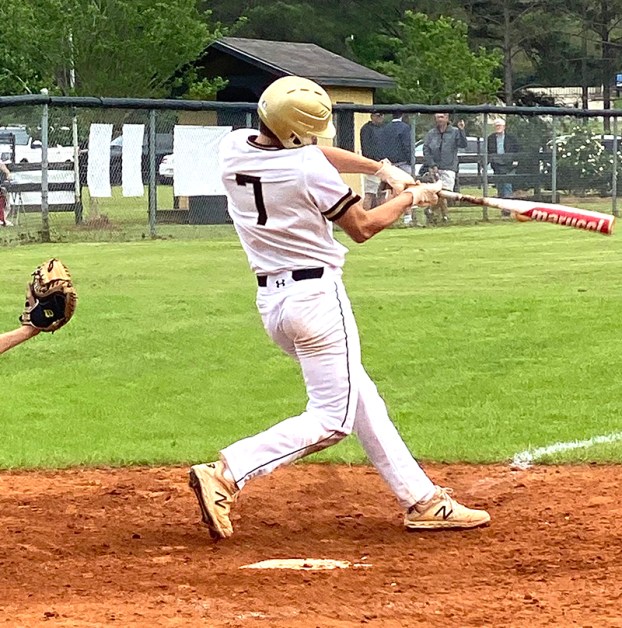 Southland Academy senior Owen Exley belted a grand slam home run in the bottom of the fourth inning to propel the Raiders to an 11-1 victory over Valwood in Game 2 of a doubleheader on Friday, April 16. Photo by Ken Gustafson

A Tale of Two Teams: Southland Academy baseball splits with Valwood in doubleheader

AMERICUS – After their 6-1 victory over Valwood (VHS) in Hahira, GA on Tuesday, April 13, the Southland Academy Baseball Team (SAR) came into Friday’s doubleheader against the Valiants ready to sweep the three-game series and improve their position in the GISA Region 3-AAA standings, as well as their Maxpreps power rankings, which will ultimately decide whether or not they make the GISA Class AAA State Playoffs. Game 1 of the doubleheader at the SAR baseball complex was one the Raiders would just like to forget entirely, as they fell to the Valiants 18-2. However, thanks in part to a grand slam home run by Owen Exley in Game 2, the Raiders made a complete turnaround by drubbing VHS 11-1.

While he acknowledged that many mistakes were made by his club in Game 1, SAR Head Coach John Brady gave credit to the Valiants for simply hitting the baseball.

“It’s not like we were throwing bums out there on the mound in the first game. They (VHS) just hit the baseball,” said Brady. “We made a bunch of mistakes…about every mistake you could make, but they just smoked the ball all over the place.” 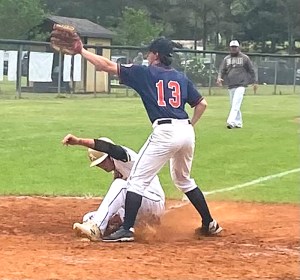 Southland Academy’s Chase Ledger slides in safely and scores on a wild pitch in the Raiders’ 11-1 victory over Valwood in Game 2 of a doubleheader.
Photo by Ken Gustafson

The Valiants did indeed hit the baseball in Game 1. They scored 18 runs on 15 hits and took advantage of eight walks by SAR pitchers. VHS also took advantage of four errors committed by the Raiders in that game.

Up until the fourth inning of Game 1, the contest was still competitive as the Valiants only led 4-2. However, beginning in the fourth inning, VHS took over the game by scoring seven runs on four hits and took advantage of three walks. Things continued to go down hill for the Raiders the rest of the way in Game 1. The Valiants scored eight more runs in the fifth inning on four hits, four walks, an error and a hit batsman (batter hit by a pitch).

The SAR offense struggled against VHS staring pitcher Harrison Hamsley. In four innings of work, Hamsley struck out six Raiders, while giving up only two runs on three hits. Buddy Brady, Will Godwin and Perry Usher each got hits in this game for the Raiders, with Brady driving in a run on a triple in the third inning. 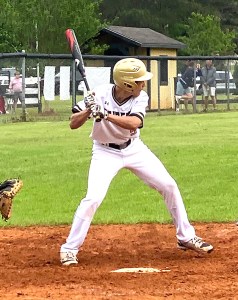 Southland Academy’s Scout Luvin gets a chance to play for the Raiders in Game 1.
Photo by Ken Gustafson

SAR pitchers struggled on the hill in Game 1. Henry Johnson got the start for SAR and gave up eight runs on eight hits, walked four and struck out two batters in a little over three innings of work. Buddy Brady came on in relief of Johnson, but didn’t fair much better. In an inning of work, he gave up six runs on four hits and walked three. James Griffin was the final SAR pitcher used in Game 1. He gave up four runs on three hits, walked one and struck out two.

“They (VHS) had their best guy going (Hamsley) and we had a little hard time with him, but like I told them, they can think about that for about 30 seconds and then they’ve got to get ready to play again,” said Coach Brady.

Judging by the drastic change in the Raiders’ performance in Game 2, they may not have even spent 30 seconds thinking about Game 1. SAR made a complete turnaround in the second game. Having only mustered three hits in the first game, the Raiders were able to score 11 runs on 10 hits to win Game 2 over the Valiants 11-1. The big hit of the game came in the bottom of the fourth inning. With the bases loaded and one out, Owen Exley belted a grand slam home run to give SAR a 6-1 lead. That grand slam totally changed the direction of the game. From then on out, the Raiders dominated offensively and defensively. They scored four more runs in the bottom of the fifth on three hits, including a two-run double by James Griffin. 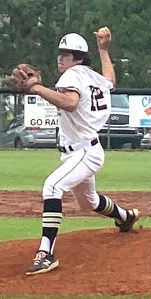 Southland Academy’s Perry Usher pitched all of Game 2 against Valwood. In that game, Usher struck out eight batters and gave up only one run on four hits to help lead the Raiders to an 11-1 victory.
Photo by Ken Gustafson

In the bottom of the sixth inning, Nathan Duke put the cherry on the whip cream with a sacrifice fly to right field to complete the 11-1 victory for the Raiders.

Exley went 3 for 4 at the plate, including the grand slam home run in the fourth, to lead the SAR offense and drove in a total of five runs on the day. Perry Usher also had a productive Game 2 at the plate with an RBI double and a single. Nathan Duke, Chase Ledger, James Griffin, Greer Hagerson and Will Godwin each earned a hit in this game, with Duke, Ledger, Griffin and Usher driving in a combined five RBIs. 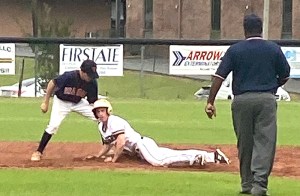 Southland Academy’s Greer Hagerson steals second base in Game 2. Hagerson went 1 for 3 in that game with a single.
Photo by Ken Gustafson

On the mound, Usher had a dominating performance for SAR. In six innings of work, the freshman struck out eight VHS batters and gave up only one run on four hits, while walking five.

“They (SAR) showed a lot of toughness. We talk about toughness all the time,” said Coach Brady. “They showed a lot of grit and determination to come back and get that win. I couldn’t be more proud because that’s two out of three from a good team and we are sitting in a good spot in our rankings right now, so hopefully, that will help us.”

The first game of this three-game series was played at VHS in Hahira back on Tuesday, April 13. In that game, SAR starting pitcher Chase Ledger struck out eight VHS batters and gave up only four hits to help lead the Raiders to a 6-1 victory. James Griffin led the SAR offense by going a perfect 3 for 3 at the plate with three runs scored. Buddy Brady also had a solid day at the plate. He went 2 for 3 with a double, a single, one run scored and three RBIs. In addition to the hitting of Griffin and Brady, Perry Usher was also in the multiple-hit column, as he went 2 for 4 with a triple, a single and two RBIs.

The Raiders are now 7-8 overall and 2-5 in Region 3-AAA competition. They will now turn their attention to Monday, April 19 when they host Southwest Georgia Academy at 4:30 p.m.

No. 11 GSW Golf Team tees off at PBC Championship this weekend