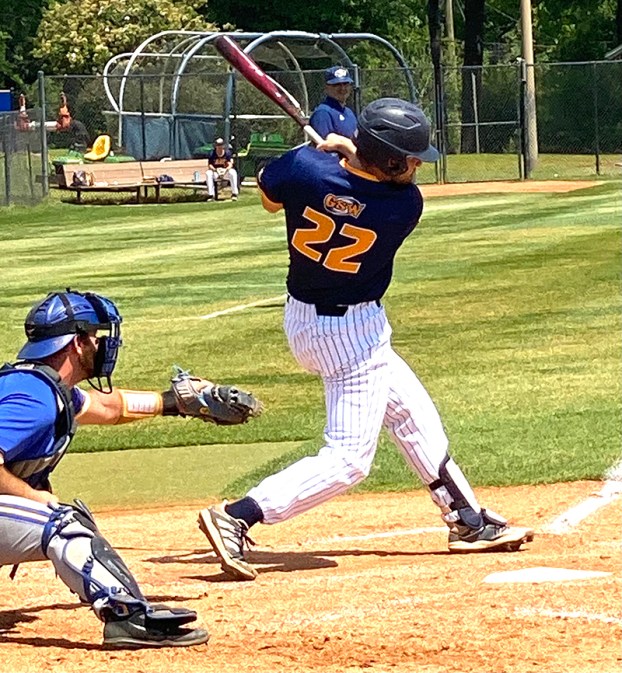 GSW first baseman Anthony Angelino went 2 for 4 in Game 2 and drove in an RBI on a single in Game 1 in the Hurricanes’ 5-1 and 7-6 losses to Lander University. Photo by Ken Gustafson

GSW Baseball Team gets swept in doubleheader with Lander University

AMERICUS – The Georgia Southwestern State University Baseball Team (GSW) came into Sunday’s doubleheader at home against Lander University (LU) ready to rebound with at least a split against the Bearcats and flush out the bad taste from a 23-4 loss to Columbus State back on Monday, April 12. However, the Bearcats won both games by scores of 5-1 and 7-6 to take two of the three games in the series, with the third game to be played on Monday, April 19.

“We’ve just got to come out and be better as a team,” said GSW Head Coach Josh McDonald. “We’re at this point where we are in a position to make a run at the postseason and guys have to step up and do things when they need to. We will get back at it tomorrow and try to salvage the series.”

In Game 1, the Hurricanes (15-16, 13-13 PBC) struggled under “Marshall Law.” LU starting pitcher Marshall Thompson laid down the law by striking out 13 GSW batters and giving up only one run on four hits in seven innings of work to get the win and lead LU to the 5-1 victory in Game 1. The Bearcats’ big blow in that game came in the top of the first inning when Justin Wager belted a three-run home run off GSW starting pitcher Tucker Smith. LU would add to its lead in the top of the third inning, as Wager would strike again, this time with an RBI single.

While the Bearcats were able to score runs early, the Hurricanes struggled against the dominating pitching of Thompson. They were not able to get on the board until the bottom of the sixth inning when Anthony Angelino drove in Gregory Wozniak on an RBI single. Wozniak doubled earlier in the inning to put himself in position to score, but that one run was all that the Hurricanes could produce in Game 1 against the Bearcats.

LU added an insurance run in the top of the eighth when Evan Harold drilled a solo home run over the left centerfield wall. 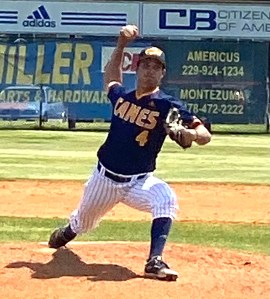 In the bottom of the ninth, the Hurricanes made it interesting. With two outs and no one on base, Matthew Mamatas singled and Angelino was hit by a pitch from LU reliever Praise Thorsen. However, there would be no comeback as Jeffrey Omohundro flew out to centerfield to end the game.

Tucker Smith started on the mound for the Hurricanes in Game 1, but struggled in the early going as he gave up the three-run home run to Wager. Smith recovered from that early setback and pitched the entire game. He also struck out 13 batters, but gave up five runs on six hits and walked two in taking the loss (4-3).

The Hurricanes were only able to muster five hits in Game 1. Mamatas, Angelino, Wozniak, Omohundro and leadoff hitter Reid Ragsdale each earned one hit in the game.

The Hurricanes didn’t have much time to think about the Game 1 loss, as Game 2 was to begin some 30 minutes later. GSW had a better offensive output in this game, but the Bearcats were one run better, defeating GSW 7-6 to take the doubleheader. 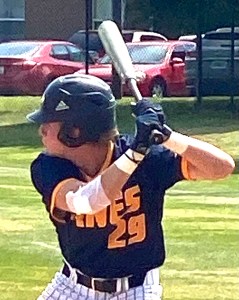 GSW third baseman Miles Hartsfiled went 2 for 5 with a double and scored two runs in Game 2 of the doubleheader with Lander University.
Photo by Ken Gustafson

LU scored one run in the first, one in the second and two in the fourth to take a 4-0 lead. The Hurricanes responded in their half of the fourth by scoring two runs on two hits and were aided by a balk called against LU starting pitcher Jack Fox. It was one of several balks called against LU pitchers on the day.

The Bearcats went up 5-2 in the top of the fifth on a sacrifice fly by Ward Betts, but GSW responded in the bottom half of the inning when Miles Hartsfield drilled a one-out double and John Austin Sutton drove in Hartsfield on an RBI single, making it 5-3 in favor of the Bearcats.

LU scored two more runs in the top of the eighth, but the Hurricanes would make one last bid for a come-from-behind victory in the bottom of the ninth. Hartsfield led things off by reaching on an error and Sutton was able to advance Hartsfield to second on a fielder’s choice. Angelino then singled to put runners at first and third and Mamatas followed that with an RBI single to bring the Hurricanes to within three runs at 7-4. Omohundro was able to draw a walk to load the bases for Gregory Wozniak, who came to the plate as the winning run. Wozniak hit a sacrifice fly to score Angelino from third. The Bearcats were then flagged for another balk, which allowed Mamatas to score from third and Omohundro to advance to second. The Hurricanes were now one base hit away from tying the ball game.

However, the comeback was not to be as pinch hitter Grant Sundean grounded out to first to end the game.

Both Angelino and right fielder Gunner George went 2 for 4 at the plate to lead the GSW offense in Game 2. Angelino scored two runs and George drove in an RBI in the losing cause. Miles Hartsfield also had a multiple-hit performance in Game 2 by going 2 for 5 with two runs scored. In total, the Bearcats scored seven runs on 14 hits and committed one error, while the Hurricanes scored six runs on 10 hits and committed no errors. 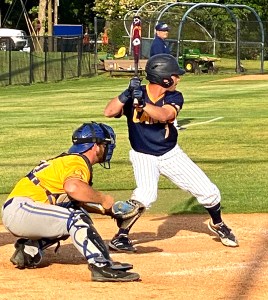 GSW second baseman Matthew Mamatas went 1 for 4 in Game 2 of the doubleheader against Lander University with an RBI single in the bottom of the ninth to help lead the Hurricanes in a come-from-behind effort that fell one run short.
Photo by Ken Gustafson

GSW starting pitcher Jared Donalson took the loss and is now 4-2 on the season. In a little over three innings of work, Donalson gave up four runs on six hits, walked five batters and struck out two.

LU starting pitcher Jack Fox got the win and is now 1-0. Fox gave up three runs on six hits, walked two and struck out three in five innings of work.

With one game remaining in the three-game series against the Bearcats, the Hurricanes are 15-16 overall and are 13-13 in the Peach Belt Conference (PBC).

This year, due to the COVID-19 Pandemic, the Peach Belt Conference will only allow the top four teams at the end of the regular season to compete in its postseason tournament. Currently, the Hurricanes are in seventh place with eight PBC games left. They will host LU in the final game of the three-game series on Monday, April 19 at 1 p.m.

A Tale of Two Teams: Southland Academy baseball splits with Valwood in doubleheader

AMERICUS – After their 6-1 victory over Valwood (VHS) in Hahira, GA on Tuesday, April 13, the Southland Academy Baseball... read more