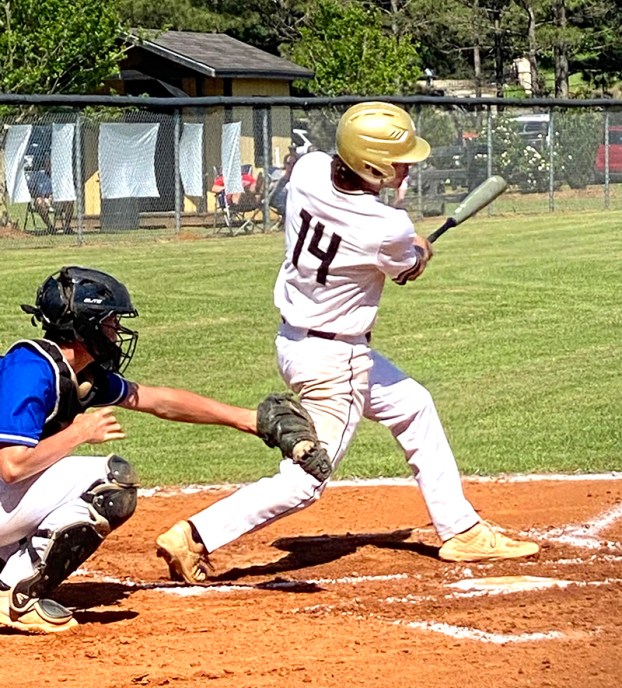 Southland Academy second baseman/centerfielder Nathan Duke went 2 for 3 at the plate with a double, a single and a run scored in the Raiders’ 11-1 loss to Terrell Academy. Photo by Ken Gustafson

AMERICUIS – After their 9-5 victory over the Eagles of Terrell Academy (TA) in Dawson on Thursday, April 22, the Southland Academy baseball team (SAR) came into Monday’s rematch against the Eagles hoping for another victory to sweep the season series. However, the Eagles struck for three runs in the first and two more in the second to take an early 5-1 lead. From that point on, things went down hill for the Raiders as TA would go on to drub SAR 11-1 on Monday, April 26 at the Southland Academy baseball complex.

Knowing that TA (12-6) is a good baseball team, SAR Head Coach John Brady was not so much as disappointed in losing, but he was extremely disappointed in his club’s lackluster performance in the loss and the Raiders’ inability to handle adversity.

“We didn’t react with any toughness and we didn’t react with any intensity,” Brady said. “We just kind of rolled over and sat with our lips poked out some and that isn’t how we need to be carrying ourselves. That’s disappointing. On the flip side, we’ve been playing good baseball and I expect nothing other on Wednesday than for us to come out and do what we’ve been doing. That’s all I expect. I know we will bounce back. This is a learning experience for a young team. We will bounce back and we will do better. We will do better on Wednesday,” Brady continued.

Coach Brady was referring to the Raiders’ upcoming doubleheader against Tiftarea Academy on Wednesday, April 28 in Chula, GA.

The Raiders (10-9) fell behind quickly in the top of the first inning as TA scored three runs on three hits. The big hit in the inning was a two-out, two-run triple by Quindon Wright. Wright would later score on a passed ball to give the Eagles an early 3-0 lead.

However, the Raiders responded in their half of the inning. Nathan Duke led off the frame with a single and Perry Usher would later drive in Duke on an RBI double.

Unfortunately for SAR, that run would be its only run of the game as the Raiders’ offense was pretty much shut down the rest of the way.

The Eagles added two more runs in the top of the third when Wright belted a two-out RBI triple to left field. TA added its second run of the inning on an RBI double by Owen Faulk, making the score 5-1 in favor of TA.

Things got worse for the Raiders in the top of the fourth as the Eagles added three more runs on a single, a walk and two errors. One of those errors allowed two runs to score. The game continued to spiral downward for SAR in the top of the sixth as the Eagles scored three more runs on a single and two more errors. In total, the Raiders committed four errors in this game and two of those errors led to a total of four runs for the Eagles. 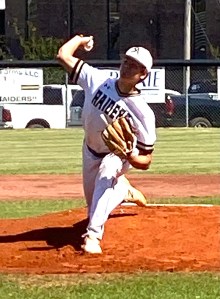 The Raiders were limited to four hits in the contest, with Nathan Duke notching two of them. Duke went 2 for 3 at the plate with a double, a single and one run scored.

Perry Usher and James Griffin each went 1 for 2, with Usher driving in an RBI.

James Griffin was the final pitcher used by SAR. In one inning of work, he gave up one run on one hit and struck out one TA batter.

Quindon Wright and Owen Faulk powered the Eagles’ offense in this game. Wright went 2 for 4 at the plate with a triple, a single, three RBIs and two runs scored, while Faulk went 2 for 3 with a double and a single.

Lawrence Carpenter went the distance on the hill for the Eagles. He gave up one run on four hits, walked four batters and struck out seven to get the win.

As a result of the loss, the Raiders, who came into this game on a four-game winning streak, fall to 10-9 on the season. The Eagles, on the other hand, improve to 12-6.

The Raiders will try to flush the bad taste from this loss out of their mouths when they head down to Chula, GA on Wednesday, April 28 to take on Tiftarea Academy in a doubleheader to close out the regular season. The first pitch of Game 1 is scheduled for 4 p.m.

ELLAVILLE – According to Schley County Head Baseball Coach Chuck Cheek, the Brookstone Cougars (19-8) were the best team that... read more