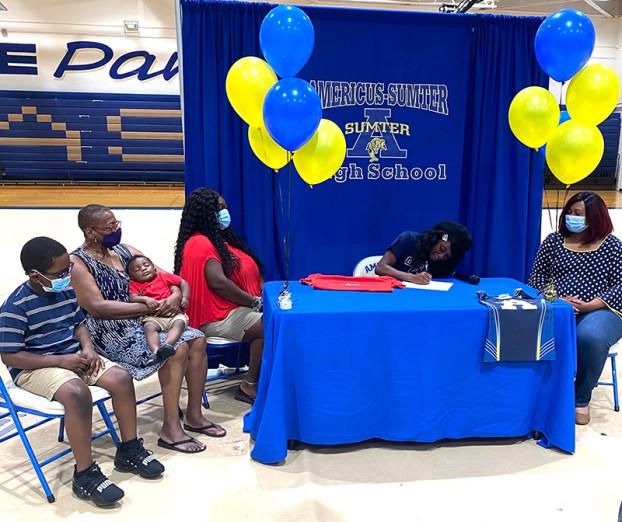 Surrounding by her coach and family members, Americus-Sumter track and field standout Selliyah Owens (middle) signs her letter of intent to run track at Columbus State University. To the right of Owens is Coach Shanika Dyson. To the left of Owens is her mother, Erica Owens, her grandmother, Linda Johnson, her younger brother, Ashton Owens and the baby (her nephew), Jestin Johnson. Photo by Ken Gustafson

AMERICUS – She has put in the work for the last four years as a Lady Panther, and now that hard work is paying off. On Monday, May 10 inside the ASHS gymnasium, Americus-Sumter track and field standout Selliyah Owens signed a letter of intent to continue her education and to run track at Columbus State University.

Owens was recruited by schools such as Young Harris College, Mercer University, Fort Valley State, Savannah State, Truett-McConnell and LSU, but in the end, she decided to make the 63-mile journey to Columbus to compete for the Cougars.

“I liked their academic program a lot and their track team really stood out to me,” said Owens. She went on to say that she plans to major in Exercise Science and would like to be a Physical Therapist after graduation.

Owens had a stellar career at ASHS. During her sophomore year, she broke school records in the 400 Meter Dash and the High Jump. During her freshman year, Owens was part of the ASHS 4×100 Meter Relay team that set a new school record in that event. According to ASHS girls’ track coach Shanika Dyson, Owens has set a new standard of excellence for the ASHS girls track and field program through her performance these past four years.

“Selliyah really set the bar. She really set the standard for what girls track and field should be,” Dyson said. “She continued to carry the torch and helped put this program on the map. One of the things that we are always talking about when we talk about goals and achievements is that we want to make sure that everybody knows that Americus-Sumter is here. We do have programs that are competitive and that we also want to be seen in the light of other powerhouse schools that have powerhouse track teams. She really wanted to make that work and she really did it.”

Dyson went on to say that Owens and her teammates weren’t able to do what they wanted to do last year due to the COVID-19 Pandemic and because of that, she was more determined this year to compete and to keep the dream of making Americus-Sumter a perennial power in girls track and field alive.

Before she signed on the dotted line, Owens told the small group of family members, coaches and friends gathered in the gymnasium that she thanks God for giving her the talent to compete in track and field and that the sport has afforded her many opportunities, blessings and life experiences throughout her high school career.

“Along this journey, I had the biggest support system and encouragement from friends, family and a coach that a female athlete at Americus-Sumter High School could ever ask for and wish for,” Owens said. “For that, I say thank you so much for everything that you all have done for me through these strong four years of running track and cross country. More specifically, I want to give a special thanks to Coach Dyson for believing in me when I was down and for trusting me even when I had my own doubts and also, for pushing me to emerge as a champion.”