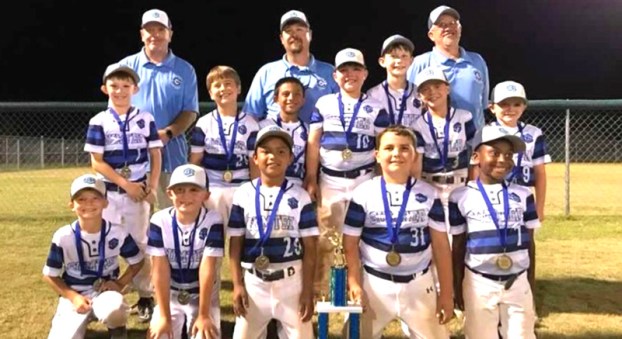 The Sumter County 8U All-Stars pose for a team picture with their medals and first place trophy after beating the Thomasville All-Stars 19-2 to win the GRPA District 3 Tournament. Photo by Shannon Blanchard

THOMASVILLE, GA – It took a couple of days involving rained out games, but the Sumter County 8U All-Star Baseball Team (SC) was able to win the Georgia Recreation and Parks Association (GRPA) District 3 Tournament in Thomasville last week.

By virtue of winning that tournament, the Sumter County All-Stars have clinched a berth in the GRPA State Tournament, which will take place in Savannah Tuesday through Friday, June 22-25.

The team won their first game over the Moultrie All-Stars by the score of 10-0 on Saturday, June 5. Sumter County got strong production at the plate from Cole Watson and Hutch Wills, among others. According to head coach Andy Lindsey, the SC team played an outstanding game defensively as well. 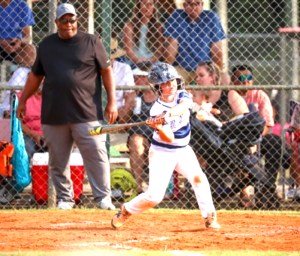 Karter Patrick of the Sumter County 8U All-Stars is at the plate.
Photo by Shannon Blanchard

Game 2 was rained out on Monday and Tuesday, but SC was finally able to get Game 2 in against Grady County on Wednesday, June 9. The boys from Sumter County were able to claim a 15-5 victory in this game, even though their defense was not as sharp as it had been in Game 1 against Moultrie. SC got big hits from Karter Patrick, Jase Storey and Stephen Kearce.

Unfortunately for the SC team, they showed up in Thomasville on Thursday ready to take on the Thomasville All-Stars, but the game was rained out before it even started. However, thanks to some quick scheduling, the game was moved to nearby Cairo. Unfortunately for SC, they lost to a tough Thomasville team 22-13, a game in which they led 13-12. Avienne Gonzalez and Silas Greene came up with important hits in this game in spite of the loss.

Undaunted, SC regrouped for their second game against Thomasville, a game that lasted almost to midnight. Mack Guest led the game off with an infield single, which was the beginning of a barrage of hits and runs by the boys from Sumter County. SC sent 21 hitters to the plate in the first inning and scored 18 runs to take a commanding 18-0 lead. The game ended in a 19-2 mercy rule victory for SC and a tournament title for the boys from Sumter County.

“Everyone in the lineup pounded the ball and hustled in the championship,” SC Head Coach Andy Lindsey said. “I’m so proud of how we responded to a tough loss and just put it behind us before playing that last game. Asking eight year-old kids to play two games and not finishing until nearly midnight is a lot. Keeping our composure in this situation is tough, but we did it against a tough Thomasville team,” Lindsey continued.