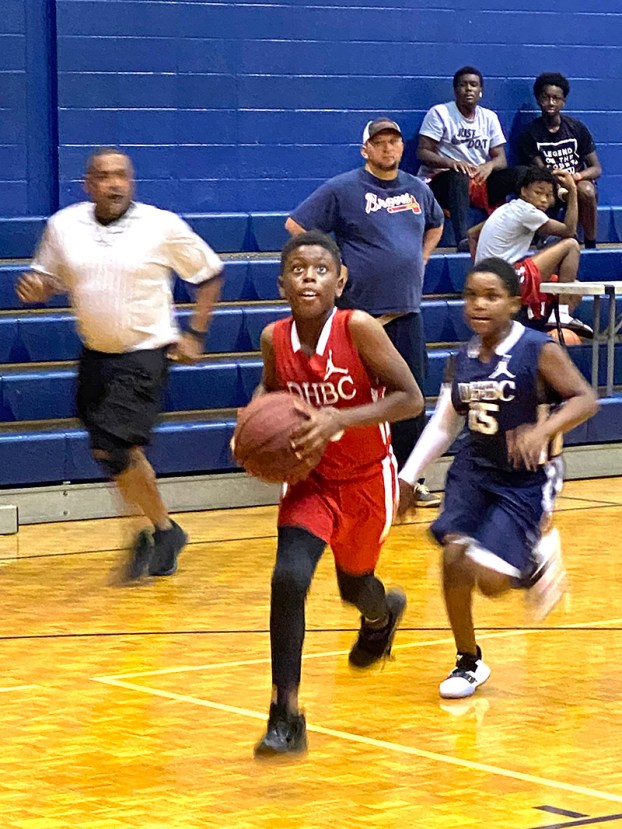 Jordan Holloway drives to the basket for the 11U Arkansas Razorbacks. Holloway scored five points to help lead the Razorbacks to victory. Photo by Ken Gustafson

AMERICUS – As the Dwight Harris Basketball Summer League’s (DHBSL) regular season comes to a close and the postseason approaches, the teams in all the different age divisions continued to provide exciting action for parents and fans on Saturday, July 17 at Americus-Sumter Ninth Grade Academy. 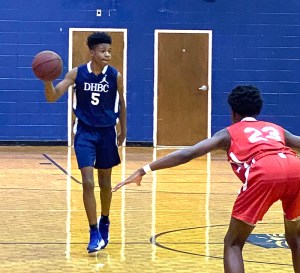 11U Gonzaga guard Brenden Covin pushes the ball up the floor for the Bulldogs. Covin scored two points in the loss to 11U Arkansas.
Photo by Ken Gustafson

In the 11U Division, the 11U Arkansas team took control early and never let up the rest of the way. The Razorbacks jumped out to a 14-3 early in the first half and went on to a convincing 32-7 victory over the 11U Gonzaga club. Both Camryn Watts and Te’Rell Sims led the Razorbacks with nine points and Jordan Holloway scored five in the winning cause.

The second game of the day featured the Arkansas and Gonzaga teams in the 14U Division. This was a close game throughout, but the Razorbacks prevailed in this contest as well by the score of 35-26. Tyler Rogers led the Razorbacks in scoring with 17 points in the winning cause and Kentravious Waters scored eight to lead Gonzaga.

Omari Woodard of the 14U Arkansas team goes up and fights for the rebound. Woodard scored eight points in the Razorbacks’ 35-26 win over Gonzaga.
Photo by Ken Gustafson

The third game of the day featured two girls’ teams: Houston and Gonzaga. Being that there weren’t enough girls to form several teams of different age groups, players as young as nine and 10 years old were playing along side and against high school age girls, which in Leslie Blankenship’s mind, provided a unique opportunity for the high school age players to mentor these younger players.

“The older girls have been mentoring the younger girls,” Blankenship said. “It has been a great experience for the younger ones to get to play with those older kids.”  Blankenship’s daughter, Sophia Blankenship, is a member of the Houston girls’ team. 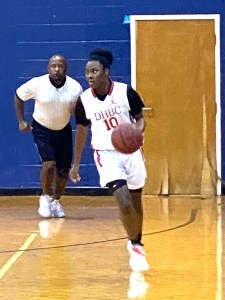 Jesstynie Scott of the Houston Lady Cougars’ team pushes the ball up the court. Scott, who will be joining the Schley County Lady Wildcats as a freshman this fall, scored five points in her club’s 57-34 win over Gonzaga.
Photo by Ken Gustafson

In this game, the Lady Cougars defeated Gonzaga 57-34. Camille Cochran led the Lady Cougars with 22 points and Sophia Blankenship scored nine in the winning cause. Jesstynie Scott, who will be joining the Schley County High School Lady Wildcats as a freshman this fall, chipped in five points in the win. Gonzaga was led in scoring by D’Eira Clark, who led all scorers with 27 points, with most of them coming on seven three-pointers.

In the fourth game of the day, the 17U Gonzaga Bulldogs defeated the Arkansas Razorbacks 56-51 in a close, hard-fought game. Anthony Tyson led the way for Gonzaga with 16 points and Chandler Collier scored 14 for the Razorbacks in the losing cause. 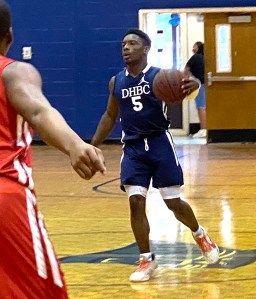 Anthony Tyson scored 16 points to lead the 17U Gonzaga team to a 56-51 victory over Arkansas.
Photo by Ken Gustafson

This week is the final week of the DHBSL Regular Season and the playoffs for all divisions will begin on Tuesday, July 27. Stay tuned to the Americus Times-Recorder for further coverage.