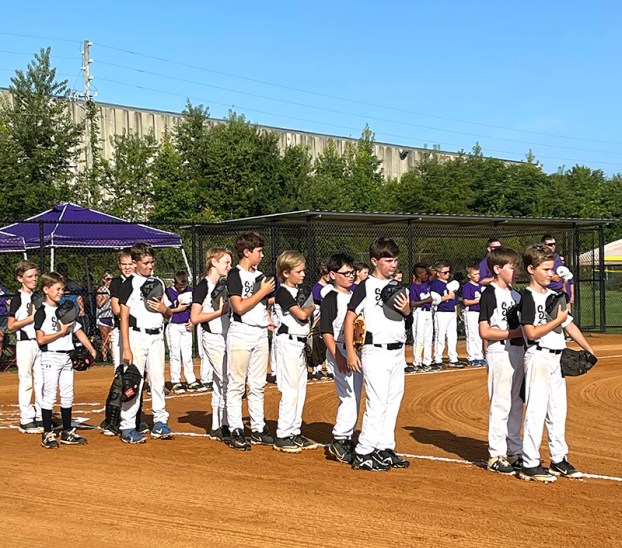 COCHRAN, GA – Having clinched a spot in the Final Four of the Dixie Youth Division II State Tournament the weekend before in Cochran, GA, the Schley County 10U All-Stars traveled back to Cochran this past weekend with hopes of winning the state championship and advancing to the Dixie Youth World Series in Laurel, Miss. Unfortunately, however, it was not to be as Schley County lost to the Wrens All-Stars 15-0 in their first game on Friday, July 16 and were then beaten 15-3 by Bleckley County the following day.

In Game 1 against Wrens, Schley County fell behind early as Wrens scored five runs in the bottom of the first, three in the second and seven more in the third. The hole was too deep for Schley County to dig out of and the SC All-Stars went on to lose that game 15-0. 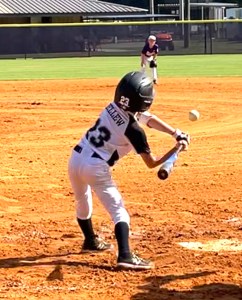 Remington Bellew is at the plate for Schley County. Bellew scored a run and drew a walk in the loss to Bleckley County.
Photo by Gwen Bellew

The SC All-Stars were able to muster two hits from Cameron Player and Jacob Rooks against Wrens, but were unable to parlay those hits into runs. The Wrens squad only got four hits themselves, but 14 walks by SC pitchers led to numerous runs scored by Wrens. However, all five SC pitchers combined to strike out seven batters.

In Game 2 against Bleckley County, the host team, the SC All-Stars showed some life on offense. In the bottom of the first inning, SC was trailing 3-0, but Brenton Blevins was able to drive in two runs on an RBI single. Then in the bottom of the second inning, Bryton Morgan led off the frame with a single. After two passed balls and a walk drawn by Jacob Rooks, Carter Sears was able to draw another walk to load the bases for Layton Harper. Harper was then hit by a pitch, which allowed a run to score. 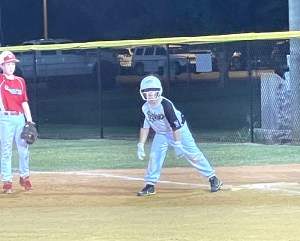 Schley County All-Star Jacob Rooks is at first base after getting on.
Photo by Gwen Bellew

However, that would be all the scoring for the SC All-Stars as BC would score a run in the second, three in the third and would explode for eight more runs in the fourth to secure its 15-3 victory.

SC used four pitchers in this game and they combined to strike out nine Bleckley County batters. Remington Bellew, SC’s Game 2 starter, struck out one batter. Blevins came on in relief of Bellew and was able to fan five more hitters. Layton Harper was the third pitcher used by SC and he was able to strike out two batters. The fourth and final pitcher used by SC, Easton Stuckey, came in and struck out one BC batter.

“The Wildcats fought hard, but they fell short,” SC Regular Season Head Coach Brett Morgan said. “They represented Schley County very well this year and all the coaches, parents and fans are proud of all the players and their accomplishments throughout the season.”