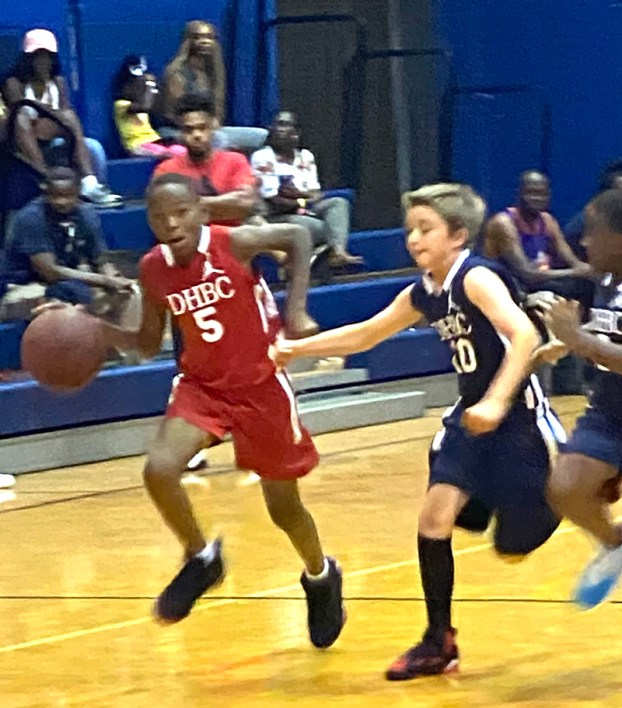 11U Arkansas guard Camryn Watts (#5) scored 10 points to lead the Razorbacks to a 29-22 victory over Gonzaga in the first round of the Dwight Harris Basketball Summer League 11U Division Playoffs. Photo by Ken Gustafson

AMERICUS – The 11U Houston Cougars and the 11U Arkansas Razorbacks both claimed victories in the first round of the 11U Dwight Harris Basketball Summer League (DHBSL) Playoffs. Houston defeated the 11U Baylor Bears 42-25 and Arkansas took care of the 11U Gonzaga Bulldogs by the score of 29-22 on Tuesday, July 27 at the Americus-Sumter Ninth Grade Academy.

Houston and Baylor took the floor first and the Cougars led most of the way. However, with the score at 24-18 in favor of Houston, Baylor guard Jordan Holmes scored on a layup to cut his team’s deficit to four at 24-20. Unfortunately for the Bears, that would be as close as they would get. The Cougars responded with a 13-2 run to take full control of the game and would go on to win by the score of 42-25.

With the win, Houston advances to the second round to play top-seeded UCLA at 5 p.m. on Wednesday, July 28.

In the second game of the 11U playoffs, the Arkansas Razorbacks led 20-8 with 4:40 to go in the game, but Gonzaga made a run in the closing minutes to give themselves a chance at a come-from-behind victory. However, the Razorbacks were able to withstand that run and held on to win 29-22. Camryn Watts led the Razorbacks in scoring with 10 points.

With the win, Arkansas advances straight to the 11U Championship Game on Saturday, July 31 at 11 a.m. They will take on the winner of the game between UCLA and Houston.