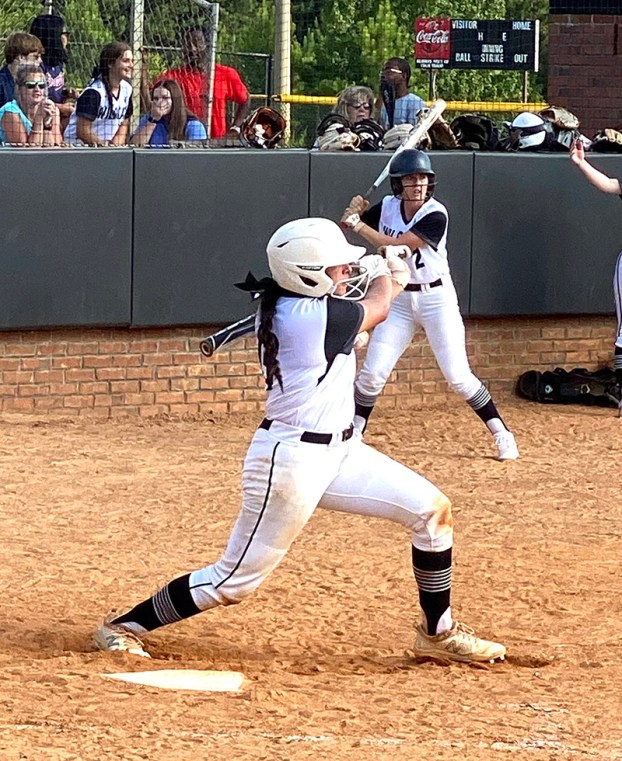 Schley County catcher Zoe Molina went 3 for 3 at the plate and knocked a two-run home run over the left field wall in the top of the third inning in the Lady Wildcats’ 8-5 loss at Marion County. ATR Archive

BUENA VISTA, GA – The Schley County Lady Wildcats Softball Team (SCHS) had a 3-0 lead against Marion County (MC) going into the fourth inning. However, the Lady Eagles scored three runs in the fourth, three in the fifth and two more in the sixth to take an 8-4 lead. SCHS scored a run in the top of the seventh and had a chance to tie or take the lead with the bases loaded and one out, but MC pitcher Emily Dickerson got Lizzie Barineau to hit into a game-ending double play and the Lady Wildcats fell to MC 8-5 on Tuesday, September 21 at Marion County High School.

With the loss, the Lady Wildcats have now dropped three straight games. They are now 5-8 overall on the season and are 2-2 in Region 5A-Public competition.

One factor that led to the loss was errors. While the Lady Eagles earned their runs through timely hitting, the Lady Wildcats committed two errors in the fourth and one in sixth. Those errors led to at least three runs scored by MC.

Makena Wurtz got the start in the circle for the Lady Wildcats. In five innings of work, Wurtz gave up six runs on 10 hits. Lizzie Barineau came on in relief of Wurtz and gave up two runs on three hits and posted one strikeout.

The Lady Wildcats got off to a good start early in the game. In the top of the third inning with two outs, Wurtz doubled to centerfield and Molina belted the two-run home run to give SCHS a 2-0 lead. The Lady Wildcats added their third run of the game in the top of the fourth on Walker’s home run, but in the bottom half of the inning, the Lady Eagles rallied for three runs on three hits and took advantage of two SCHS errors.

In the top of the fifth, the Lady Wildcats had a chance to reclaim the lead. With one out, Emma Walker doubled to centerfield and Molina would later draw a walk to put runners at first and second with two outs. However, MC pitcher Emily Dickerson struck out Berkley Goodin to end the threat.

In the bottom of the fifth, the Lady Eagles took advantage by scoring three more runs on four hits to take a 6-3 lead. SCHS responded in the top of the sixth when Brenna Jacobs drove in Maddie Walker on an RBI single, but in the bottom half of the inning, MC countered once again with two runs on three hits and took advantage of an error.

In the top of the seventh, the Lady Wildcats got off to a good start when Wurtz reached on an error and Molina singled to put runners at first and second with nobody out. Goodin popped out into foul territory for the first out, but Landry Whaley drove in a run on an RBI single. Maddie Walker then singled to left field and SCHS had runners at first and second with one out, but hopes of a come-from-behind victory ended when Lizzie Barineau hit into a double play to end the game.

J.K. Shivers led the Lady Eagles (16-6, 4-0) by going 3 for 4 at the plate with an RBI and two runs scored and MC  pitcher Emily Dickerson gave up five runs on 11 hits, walked one batter and struck out six in seven innings of work to get the win.

The Lady Wildcats will try to end their three-game losing streak when they hit the diamond at Wildcat Park on Wednesday, September 22 to take on Bleckley County in a non-region contest. First pitch is scheduled for 5:30 p.m.