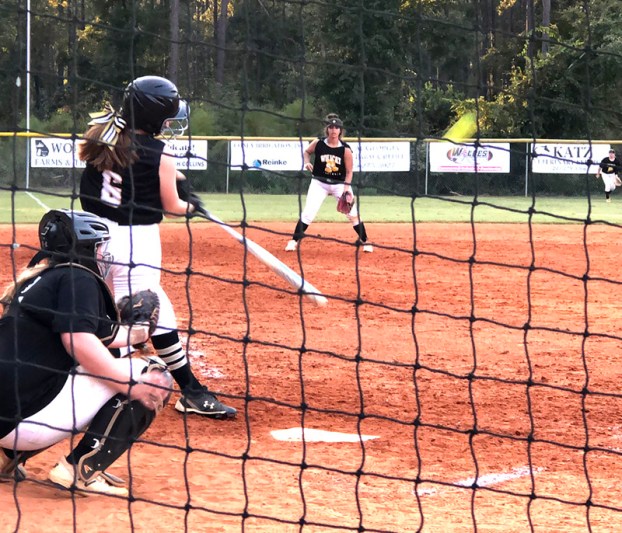 Southland Academy Right Fielder T.J. Bowden went 1 for 4 with a double and scored a run in the Lady Raiders’ 10-5 loss to Crisp Academy. Photo by Carol Burrell

CORDELE – Trailing the Crisp Academy Lady Wildcats 4-0 after three innings, the Southland Academy Lady Raiders (SAR) came off the matt and erupted for five runs on three hits and took advantage of two walks and two hit batsmen to take a 5-4 lead. However, the Lady Wildcats responded with five more runs on two hits, two walks, an error and a dropped third strike in the bottom of the fourth. That five-run frame by CA would eventually lead to a 10-5 loss for the Lady Raiders on Wednesday, September 29 at Crisp Academy.

With the loss, SAR drops to 9-9 on the season with three more games remaining before the GISA Class AAA State Playoffs. In contrast, the Lady Wildcats improve their record to 8-6

The Lady Raiders struggled in this contest to get their offense going, as they were only able to pound out four hits on the day. Morgan Minick, Morgan Weaver, T.J. Bowden and Maddie Godwin accounted for those four hits.

Chelci Woody got the start in the circle for SAR. In three innings of work, Woody gave up four runs on seven hits and had one strikeout. Ila Johnson came on in relief of Woody and gave up six runs on five hits, walked three and struck out one.

The Lady Wildcats jumped out to a 1-0 lead when Mia Purvis drove in a run on an RBI single. Then in the bottom of the third, CA scored three more runs on four hits.

However, the Lady Raiders came alive in the top of the fourth. With one out, Bowden doubled to centerfield and Godwin drove her in on an RBI single. Then with two outs, Eva Grace Studdard and Jadie Burrell were both hit by pitches and Minick was able to draw a walk to load the bases for Morgan Weaver. Weaver then took advantage of the situation by driving in two runs on an RBI single to tie the game at 4-4. Minick would later score on an error to give the Lady Raiders a 5-4 lead.

Unfortunately for SAR, the Lady Raiders were not able to hang on to that lead. In the bottom of the fourth, Bri Mauldin led things off for CA by reaching on a dropped third strike and Laura Evans drew a walk to put runners at first and second with nobody out. Both Mauldin and Evans advanced to third and second respectively on a wild pitch and Mauldin was able to score the tying run on a fielder’s choice by Abigail Brown. Libby Manning then gave the Lady Wildcats a 6-5 lead with an RBI single to left field. CA would later score three more runs in the inning as a result of a double from Purvis, a walk and an error.

For the remainder of the game, the Lady Raiders were unable to generate any offense and the Lady Wildcats scored one more insurance run in the bottom of the sixth to secure their 10-5 win.

Libby Manning got the start in the circle for CA and made things difficult for SAR. In four innings of work, Manning gave up five runs on four hits, walked three and struck out six SAR hitters. Camilla Bloodworth came on in relief of Manning and pitched two scoreless innings with one strikeout.

Purvis and Bloodworth both led the Lady Wildcats’ offense. Both of them went 3 for 4 at the plate, while Bloodworth drove in three RBIs.

The Lady Raiders will step back into region play when they host Valwood on Monday, October 4 at 4:30 p.m.