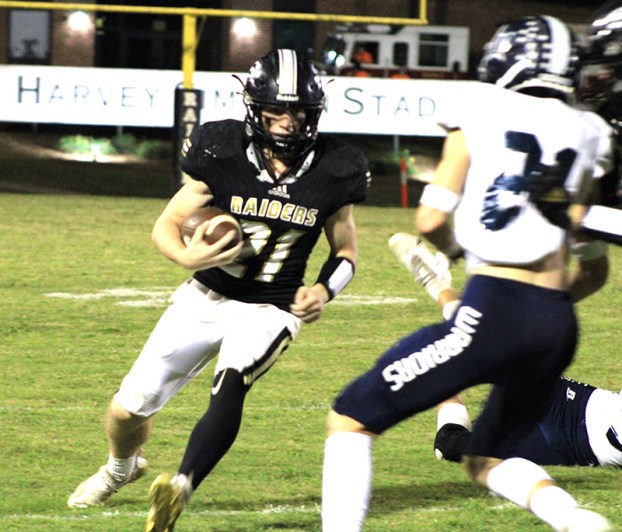 Southland Academy Senior Running Back Hudson Collins (#21) rushed for 161 yards on 17 carries and scored four rushing touchdowns to lead the Raiders to a 35-14 victory over Southwest Georgia Academy (SGA). Photo by Kayla Hudgins

AMERICUS – Southland Academy (SAR) senior running back Hudson Collins had another break out performance for the Raiders. Collins rushed for 161 yards on 17 carries and scored four rushing touchdowns to lead SAR to a 35-14 victory over Southwest Georgia Academy (SGA) on Friday, October 1 at Harvey Simpson Stadium.

With the win, the Raiders improve their overall record to 3-3 on the season, while SGA falls to 4-2.

In addition to Collins’ performance on the ground, SAR senior running back David Dickens also bolstered the Raiders’ running attack by rushing for 159 yards on 10 and scoring a touchdown. In total, the Raiders’ ground game was more than solid, as they were able to gain 350 yards of offense on 40 carries. 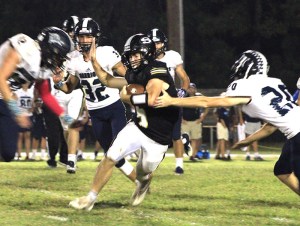 Southland Academy Senior Running Back David Dickens rushed for 159 yards on 10 carries and scored a rushing touchdown in the Raiders’ 35-14 victory over SGA.
Photo by Kayla Hudgins

SAR got the job done on the defensive side of the ball as well. Senior Keaton Griffin led the Raiders with four solo tackles and five assisted tackles for a total of nine tackles on the night. Juniors Tanner Humphrey and Cedric Smith, along with senior Caleb Law, each played a part in forcing the Warriors into committing two turnovers. Smith had one interception on the night, while Humphrey forced a fumble and Law recovered one for SAR.

The Raiders will now turn their focus to a very tough Gatewood team, whom they will host on Friday, October 8. In last year’s meeting between the two teams in Eatonton, GA, the Raiders fell to the Gators 16-7. Gatewood will enter Harvey Simpson Stadium on Friday with an overall record of 3-2 on the season, having defeated Briarwood Academy 28-13 this past Friday. Kickoff is scheduled for 7:30 p.m.

From Staff Reports     AMERICUS – Despite having committed six errors in the field through six innings of play,... read more