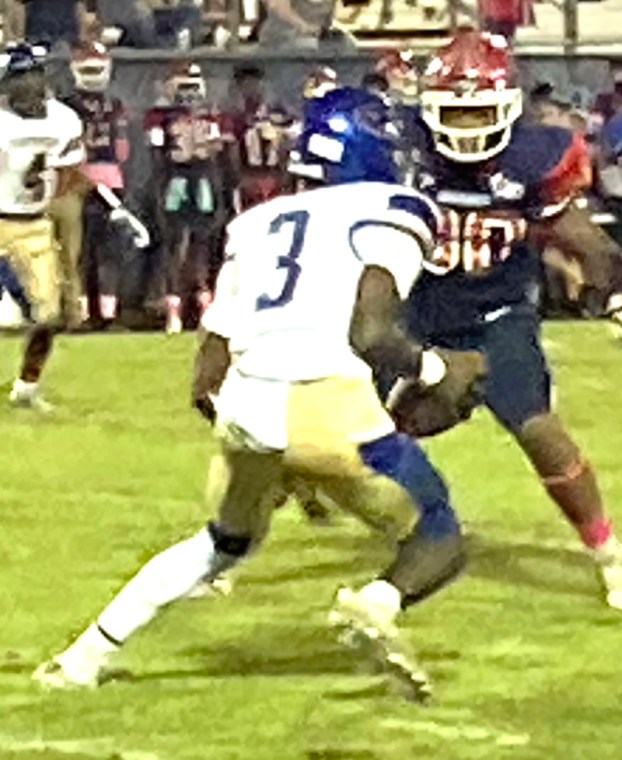 Sumter County Quarterback Cameron Evans (#3) tries to get past a JHS defender. Evans threw a touchdown pass to Torey Smith in the second half for the Panthers’ only points of the game. Photo by Coleman Price

JACKSON, GA – The Sumter County High School Football Team (SCHS) tried once again to earn its first win of the season when the Panthers traveled up to Jackson, GA on Friday, October 9 to take on the Jackson Red Devils. Unfortunately for the Panthers, they fell behind 35-0 before halftime and were not able to dig themselves out of the huge hole. As a result, the Panthers (0-5, 0-3 Region 2-AAA) went on to lose to JHS 49-6.

Like in previous other SCHS games this season, the Panthers made a big play on their first offensive possession. They started at their own 9-yard line and were able to net eight yards on first down. However, on second down and two from the Panthers’ 17-yard line, SCHS quarterback Cameron Evans threw a pass down field that was intercepted by JHS cornerback Okemus Grier Jr., who returned the ball 25 yards for a JHS touchdown. The extra point by Peyton Zimmerman was good and the Red Devils had a 7-0 lead with 9:55 to go in the first quarter.

Over the next few possessions, neither offense could mount a drive that resulted in points. Then SCHS had the ball at its own 22-yard line, but Evans was sacked for a 10-yard loss by JHS linebacker Tyler McCord. This would eventually force the Panthers into a fourth and long situation and they were forced to punt. However, as SCHS punter James Herron was trying to get the punt off, he was sacked by several Red Devils at the 5-yard line. JHS (4-3, 3-1 Region 2-AAA) wasted no time in taking advantage of its good fortune, as fullback Dawson Livingston would score from just a few yards out. The extra point by Zimmerman was good and the Red Devils led 14-0 with 1:29 left in the first quarter. 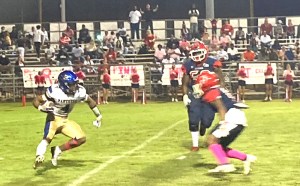 Then with a little over nine minutes left before halftime, JHS ( mounted a seven-play, 62-yard scoring drive that started from their own 38-yard line. They finished the drive off with another rushing touchdown by Livingston from three yards out. The extra point by Zimmerman was good and the Panthers found themselves in a deep hole, trailing 21-0 with 8:57 to go before halftime.

Then with 3:01 left before the half, the Red Devils had the ball at the SCHS 40 before quarterback Les Callen threw a 27-yard strike to Cameron Edwards at the Panthers’ 13. Making matters worse, a facemask penalty was called against the Panthers, moving the ball down to the SCHS 7. A couple of plays later, Grier scored his first offensive touchdown of the night by scoring from five yards out. The extra point by Zimmerman was good and the Red Devils led 28-0 with 1:40 to go before halftime.

The Panthers struggled to move the football on their next offensive possession and were faced with a fourth and three situation at their own 27, but instead of punting, SCHS decided to try a fake punt. However, the play didn’t fool the Red Devils and Herron was tackled at the SCHS 10-yard line.

Fortunately for the Panthers, they would not get shut out in this game. They were able to get a long kickoff return that ended down at the JHS 12-yard line. Aided by a facemask penalty against the Red Devils, SCHS got the ball at the JHS 6-yard line before Evans found Torey Smith in the end zone for a touchdown on the last play of the half.

Unfortunately for SCHS, that would be its only scoring play of the game.

In the third quarter, the Red Devils resumed their onslaught. With a little over five minutes left in the quarter, JHS had the ball at the SCHS 10 when the Panthers almost created a turnover by forcing a fumble. However, the ball was recovered by Edwards and he ran it into the end zone for another Red Devils touchdown. The extra point by Zimmerman was good and JHS led 42-6 with 4:55 left in the third.

JHS scored its final touchdown of the game when Grier finished off an 11-play, 51-yard drive with a score from three yards out. Zimmerman’s extra point was good and the Red Devils would go on to beat the Panthers 49-6.

SCHS will try once again to earn its first win of the season when they travel up to Macon on Thursday, October 15, to take on the 0-6 Chargers of Central (Macon) in a game between two teams desperate for a win. Kickoff from Henderson Stadium is scheduled for 7 p.m.

Information in this article was obtained from the Jackson Progress-Argus newspaper in Jackson, GA.