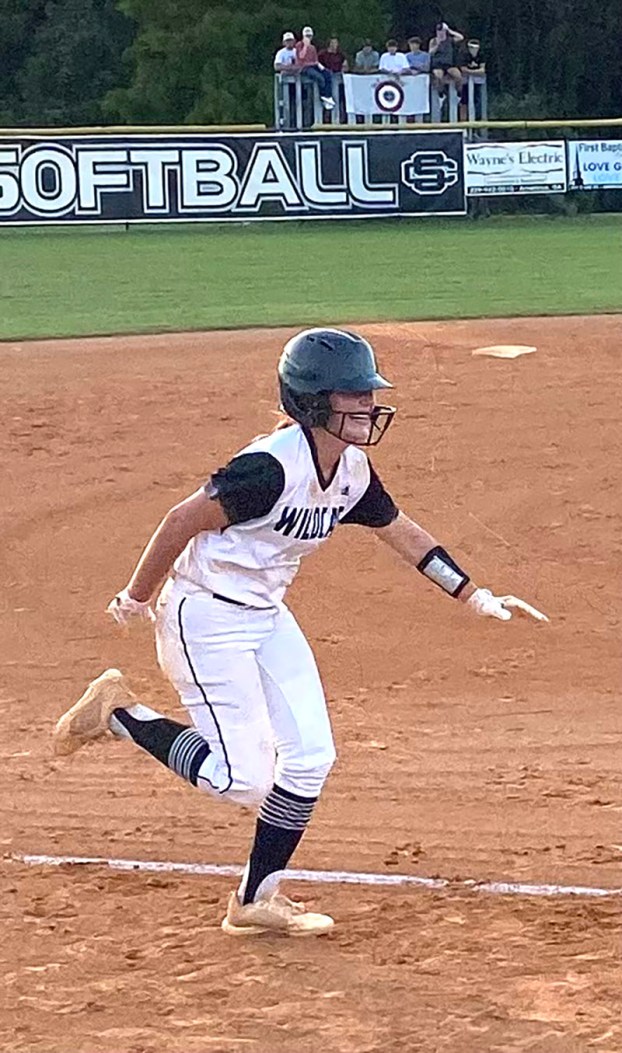 Schley County Shortstop Destiny LeCroy rounds third base and heads for home after drilling a solo home run to lead off the third inning of Game 2. Photo by Ken Gustafson

ELLAVILLE – In Game 1 of the best-of-three-games state playoff series between Schley County (SCHS) and Glascock County (GC), the Lady Wildcats couldn’t solve GC pitcher Grace Kelley, who struck out 17 SCHS hitters and led the Lady Panthers to a 7-0 shut out victory in Game 1.  However, the Lady Wildcats made adjustments at the plate and became a completely different team in Game 2.  They scored 14 runs on 14 hits, which included home runs by Destiny LeCroy and Zoe Molina, and manhandled the Lady Panthers 14-4 in Game 2 of the first round of the GHSA Class A-Public State Softball Playoffs on Wednesday, October 13 at Wildcat Park on the SCHS campus.

As a result, the third and deciding Game 3 of this first round state playoff series will be held on Thursday, October 14 at 3 p.m.

Though he was impressed with Kelley’s performance against his club, SCHS Head Coach Jody Sellars was surprised that the Lady Wildcats struck out as many times as they did in Game 1. However, he was extremely pleased in the way his club regained its focus at the plate and bounced back in Game 2.

“We struck out 17 times. I’ve never had a team strike out that much in a game,” Sellars said. “We ended up wearing her (Kelley) down. She wore down a little bit in Game 2 and got a little slower. My girls did a better job of locking in and getting on it. Zoe (Molina) setting the tone in the first inning was huge. It gave us some much-needed life that we needed after Game 1. Our girls have been up and down all year. That’s what I told their coach going in what to expect. He said, ‘Coach, I’ve heard that you’re pretty good.’ I said, ‘It depends on what day we show up.’ We’ve been kind of inconsistent, but if my girls will compete at the plate, we’re going to pitch and we’re going to play defense for the most part and we’ll compete at the plate. It gives us a chance against most teams. I’m pleased to bounce back and push to a Game 3. I’m excited to see what happens tomorrow.” 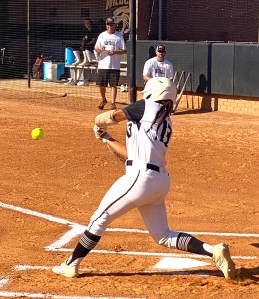 Schley County Catcher Zoe Molina went 2 for 4 at the plate with a home run, two RBIs and a run scored in the Lady Wildcats’ 14-4 win over Glascock County.
Photo by Ken Gustafson

However, GC finally broke through in the top of the fifth. With two outs, Lexy Mitchell singled and Kelley drove in the first run of the game on an RBI double to left field. Jacey Usry followed that up with a single and courtesy runner Zanya Harris scored on an error to give GC a 2-0 lead. 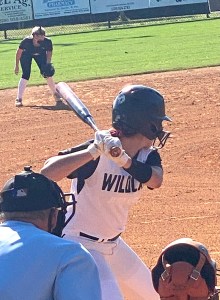 Destiny LeCroy helped lead Schley County to a split with Glascock County by homering to lead off Game 2 and going 3 for 4 at the plate with three RBIs and three runs scored.
Photo by Ken Gustafson

In the bottom of the fifth, the Lady Wildcats created an opportunity to score runs when Destiny LeCroy led off with a single and Barineau doubled to right field, putting runners on second and third with nobody out. However, Kelley was able to strike out the next three Lady Wildcats to end the threat.

The Lady Panthers put the game out of reach in the sixth inning by scoring five runs on five hits and taking advantage of two SCHS errors. The big blows came off the bats of Alexianna Mitts and Mitchell. Mitts belted a two-run homer over the left field wall and Mitchell drove in two more runs on an RBI triple. Kelley then drove in the seventh run of the game on an RBI single.

Kelley continued her dominance on the mound against the Lady Wildcats, striking out the side in the bottom of the sixth and retiring Berkley Goodin, LeCroy and Barineau in the bottom of the seventh to give the Lady Panthers the 7-0 victory in Game 1, putting them one win away from advancing to the second round of the state playoffs. 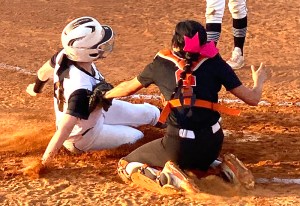 The Lady Wildcats could only muster two hits in Game 1: a double by Barineau and a single by LeCroy, which both came in the fifth inning. Barineau went the entire way in the circle for SCHS in Game 1. She gave up seven runs on 12 hits and struck out four GC batters.

Mitchell led the Lady Panthers’ offense in Game 1 by going 3 for 4 at the plate with two RBIs and two runs scored. As dominating as Kelley was in the circle for GC (17 strikeouts, one walk and two hits), she was potent at the plate as well, going 2 for 4 with a double, a single and two RBIs. Both Usry and Mitts also went 2 for 4 at the plate, with Mitts hitting a two-run home run in the sixth. 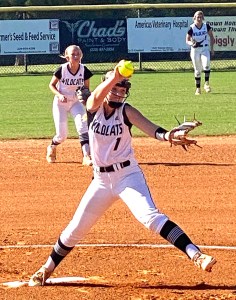 Schley County Pitcher Lizzie Barineau pitched four scoreless innings in Game 1 before giving up two runs in the fifth and five in the sixth in the 7-0 loss to Glascock County.
Photo by Ken Gustafson

Now, it was do or die for Schley. The Lady Wildcats had to find a way in Game 2 to generate offense against Kelley, or their season would end by getting swept at home.

SCHS would be the visiting team in Game 2 and the Lady Wildcats were able to find the magic in the bats right away, as Zoe Molina led off the game with a solo home run off Kelley over the left field wall. That home run by Molina set the tone for the rest of the game, as the Lady Wildcats showed themselves to be a completely different team than what they showed in Game 1. 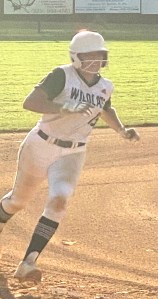 After Molina’s leadoff homer, Maddie Walker executed a bunt single and stole second. Kelley was able to strike out Landry Whaley for the first out of the inning, but Goodin and LeCroy followed with back-to-back singles to push across another run. Barineau then drove in the third run of the game on a fielder’s choice and LeCroy was able to score on a passed ball. Just like that, the Lady Wildcats had a 4-0 lead in Game 2.

In the top of the second, the Lady Wildcats added three more runs as a result of two hits and some aggressive base running by courtesy runner Jaelyn Wynn, who stole second, third base and home plate. Maddie Walker would later score another run on a passed ball to give the Lady Wildcats a 7-0 lead. 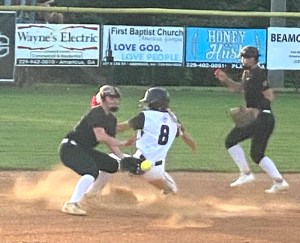 Schley County Courtesy Runner Jaelyn Wynn steals second base for the Lady Wildcats. Wynn also stole third and home plate in the top of the second as part of a three-run inning.
Photo by Ken Gustafson

GC got on the board in the bottom of the second, but SCHS countered with its eighth run of Game 2 when LeCroy drilled a solo home run over the left field wall to lead off the top of the third. In the top of the fourth inning, the Lady Wildcats added to their lead when Berkley Goodin drove in Maddie Walker on an RBI triple, making the score 9-1 in favor of SCHS.

The Lady Panthers scored a run in their half of the fourth and another run in the sixth, but in the top of the seventh, the Lady Wildcats put Game 2 totally out of reach. They exploded for five runs on four hits, including RBI doubles by LeCroy and Maddie Walker. Emma Walker also drove in a run on an RBI single and scored on an error when Molina hit a fly ball that was mishandled by the GC left fielder. 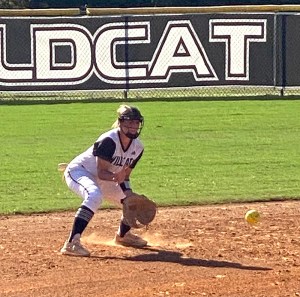 With two outs in the bottom of the seventh, GC was able to score a run as the result of an error, but it was academic by then, as the Lady Wildcats would go on to win the second game 14-4 and force a third and deciding Game 3 on Thursday. 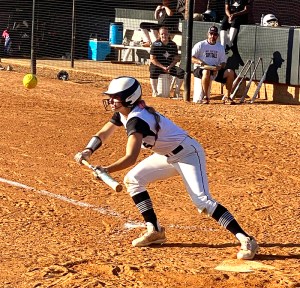 Schley County Right Fielder Berkley Goodin executes a bunt single in the first inning of Game 2 against Glascock County. Goodin went 3 for 4 in Game 2 with an RBI triple and scored three runs.
Photo by Ken Gustafson

LeCroy, Maddie Walker and Berkley Goodin each went 3 for 4 at the plate to lead the SCHS offense in Game 2. LeCroy drove in three RBIs and scored three runs, including her home run in the third. Walker went 3 for 4 with an RBI and three runs scored and Molina went 2 for 4 with a home run, two RBIs and one run scored.

Makenna Wurtz was the Game 2 starting pitcher for SCHS and went the distance. She gave up four runs on eight hits, walked one and struck out four. 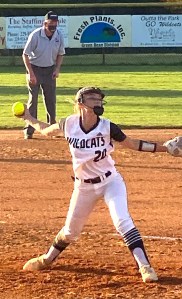 Schley County Pitcher Makenna Wurtz went the entire game in the circle for the Lady Wildcats in Game 2. She gave up four runs on eight hits, walked one and struck out four to get the win.
Photo by Ken Gustafson

Mary Beth Hadden led the GC offense in Game 2 by going 2 for 3 at the plate with an RBI and a run scored, while Lexy Mitchell and Jacey Usry each went 2 for 4, with Usry scoring two runs.

Kelley, who had been so dominant in the circle for GC in Game 1, was roughed up by the Lady Wildcats in Game 2. She gave up 14 runs on 14 hits, walked two and struck out eight. 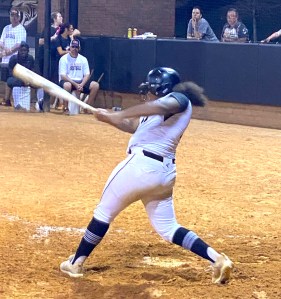 Schley County’s Kallie Bishop tries to connect on a pitch in Game 2 against Glascock County.
Photo by Ken Gustafson

The Lady Wildcats (9-14) will face GC (11-8) in the third and deciding game of this series at Wildcat Park on Thursday, October 14 at 3 p.m. The winner of Game 3 will advance to the second round of the GHSA Class A-Public State Playoffs and will face the Lady Bulldogs of Emmanuel County Institute (24-3), who swept Pataula Charter in their first round series by scores of 21-3 and 8-0.