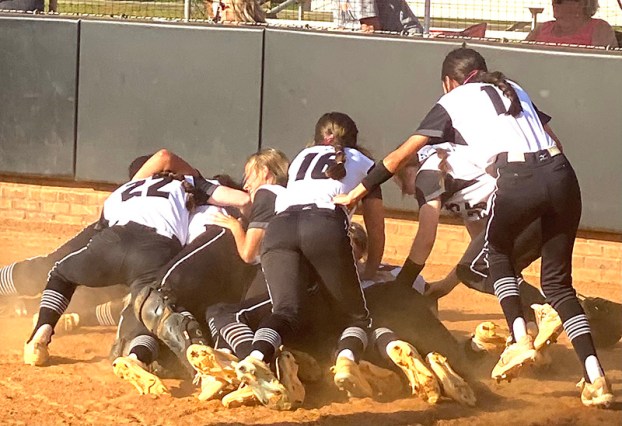 The Schley County HS Softball Team dog piles Destiny LeCroy after she scores the winning run on Makenna Wurtz’s pop fly that was mishandled by the GC second baseman. Photo by Ken Gustafson

ELLAVILLE – Having earned a split against Glascock County (GC) in the first round of the GHSA Class A-Public State Playoffs the day before, the Schley County High School Softball Team (SCHS) came into Thursday’s deciding Game 3 with hopes of a series-clinching victory over the Lady Panthers in this best-of-three-game playoff series. After the first three innings of play, things did not look good for the Lady Wildcats, as the Lady Panthers had a 5-0 lead. However, momentum began to shift towards SCHS when Liberty Justice led off the bottom of the third inning with home run. That was the beginning of a rally that netted the Lady Wildcats four more runs over the next three innings, with the tying run being scored by Berkley Goodin as the result of an error. The game needed extra innings to decide a winner and in the bottom of the eighth, the Lady Wildcats completed their dramatic comeback when Makenna Wurtz hit a pop fly with two outs that was mishandled by the GC second baseman. That error allowed Destiny LeCroy to score the winning run from third and gave SCHS a 6-5 come-from-behind victory, along with a berth in the second round of the state playoffs.

SCHS Head Coach Jody Sellars has coached a lot of great games in his tenure as the head coach at Schley County and according to Sellars, this one ranks as one of the best. “It’s up there. This is definitely, I’m pretty sure, the biggest Game 3 win at home in my career,” Sellars said. “I’m super proud of the girls. We had a talk yesterday about not rolling over if we were to get down. That’s exactly what happened. They got down 5-0, but the girls stayed calm and focused and kept battling and got themselves back in the game, cut it down close and then tied it up and kept fighting and kept fighting until they got the win in the eighth. I’m super proud of them for being resilient and competing. That’s what the goal is every day. It’s to compete every pitch and I though they did a great job of it today.” 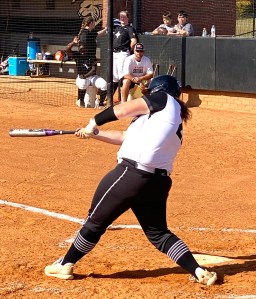 Schley County’s Liberty Justice homered in the third and drove in a run on an RBI single in the fourth to help lead the Lady Wildcats to a 6-5 come-from-behind victory over Glascock County in Game 3 of the first round of the GHSA Class A-Public State Playoffs.
Photo by Ken Gustafson

Goodin led the Lady Wildcats’ offense by going 3 for 4 at the plate with two runs scored, but the home run by Liberty Justice in the third and her RBI single in the fourth proved to be crucial catalysts in leading the Lady Wildcats to victory. Lizzie Barineau also came through in the clutch for SCHS by going 1 for 3 at the plate with two RBIs, while Destiny LeCroy, Maddie Walker and Zoe Molina each earned a hit in the contest, with LeCroy scoring two runs. In total, the Lady Wildcats scored six runs on nine hits and committed two errors, while GC pushed across five runs on 12 hits and also committed two errors. 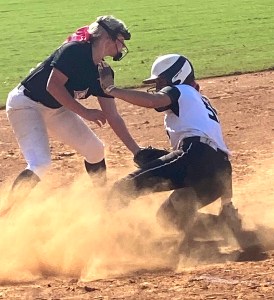 Schley County Right Fielder Berkley Goodin steals third base as part of a double steal executed by the Lady Wildcats in the sixth inning of Game 3 against Glascock County. Goodin led the SCHS offense by 3 for 4 at the plate with two runs scored.
Photo by Ken Gustafson

Makenna Wurtz, who had a strong pitching performance in Game 2, got the start in the circle for SCHS in Game 3. In three innings of work, she gave up six runs on nine hits, with three of those runs being earned. She walked one batter and had one strikeout. Barineau came on in relief of Wurtz and pitched five scoreless innings, giving up only three hits and posting four strikeouts. 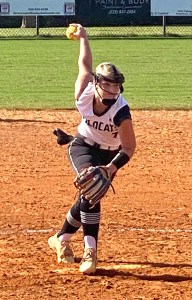 Schley County Pitcher Lizzie Barineau pitched five scoreless innings to help lead the Lady Wildcats to a 6-5 come-from-behind victory in extra innings over Glascock County in the third and deciding game of the first round of the state playoffs.
Photo by Ken Gustafson

Fortunately for the Lady Wildcats, Wurtz was able to hold GC scoreless the rest of the way, which allowed the SCHS offense to chip away and eventually pull off the comeback.

After Justice’s home run in the third and RBI single in the fourth, the Lady Wildcats had trimmed their deficit to 5-3, but in the bottom of the sixth, SCHS would find away to tie the game. Goodin led off the frame with a single and LeCroy drew a walk off GC Starting Pitcher Grace Kelley. The Lady Wildcats then executed a double steal, as Goodin stole third base and LeCroy stole second. This was another key occurrence in the game that would eventually lead to its outcome. With runners at second and third and nobody out, Goodin was then able to score on an error, cutting the GC lead to 5-4. Then Barineau hit a sacrifice fly to centerfield, scoring LeCroy from third and tying the game at 5-5. 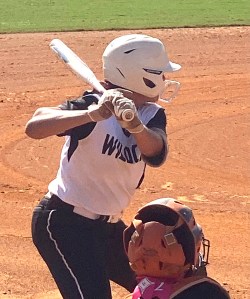 Schley County Catcher Zoe Molina went 1 for 4 with a double in the Lady Wildcats’ 6-5 win over Glascock County.
Photo by Ken Gustafson

In the bottom of the seventh, SCHS had a chance to win the game in regulation when Molina doubled to centerfield with one out. However, Kelley struck out Maddie Walker and got Landry Whaley to pop out to second base to end the Lady Wildcats’ threat.

In the top of the eighth with two outs, the Lady Panthers were able to place a runner at first when Kelley reached on an error, but Wurtz was able to get Jacey Usry to fly out to right field to end the threat, setting the stage for the Lady Wildcats’ heroics in the bottom half of the inning. 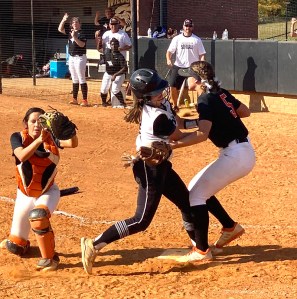 Berkley Goodin scores a run and runs into GC pitcher Grace Kelley in the process.
Photo by Ken Gustafson

With one out in the bottom of the eighth, LeCroy doubled to left field, putting the winning run in scoring position for SCHS. After Barineau popped out to Kelley for the second out, LeCroy put the pressure on the GC defense by stealing third base.

Then with two outs, Makenna Wurtz hit a pop fly in the infield, but the GC second baseman dropped the ball. That allowed LeCroy to score the winning run and it sent the Lady Wildcats into the second round of the state playoffs. 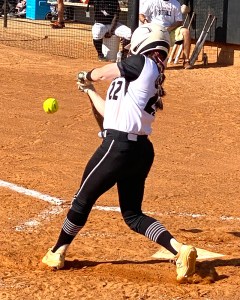 Kelley, who pitched both games for the Lady Panthers on Wednesday, went the entire way in the circle again for GC. She gave up six runs on nine hits, walked one batter and struck out three. Kelley, Lexi Mitchell, Alexianna Mitts and Addie Bentley each had multiple hits for GC in Game 3. Both Mitchell and Meribeth Hadden led the Lady Panthers in RBIs with two. GC ends its season with an overall record of 10-9. 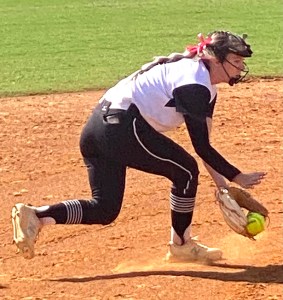 “They are a really good team. I know they’ve got a really good pitcher,” Sellars said. “I know Frank Wimberly, the head coach over there, really well. I’m good buddies with him. He does a great job. They’re going to be a scrappy team offensively and pretty good defensively with a really good pitcher. We’ve got to play at a high level in all three areas of the game: pitching, defense and offense, and compete at a high level and see if we can’t wear their pitcher down and get to her maybe in three games.”

Game 1 on Wednesday is scheduled to start either at 3 or 4 p.m., followed by Game 2. Should the third and deciding game be necessary, it will be on Thursday, October 21.

ELLAVILLE – In Game 1 of the best-of-three-games state playoff series between Schley County (SCHS) and Glascock County (GC), the... read more